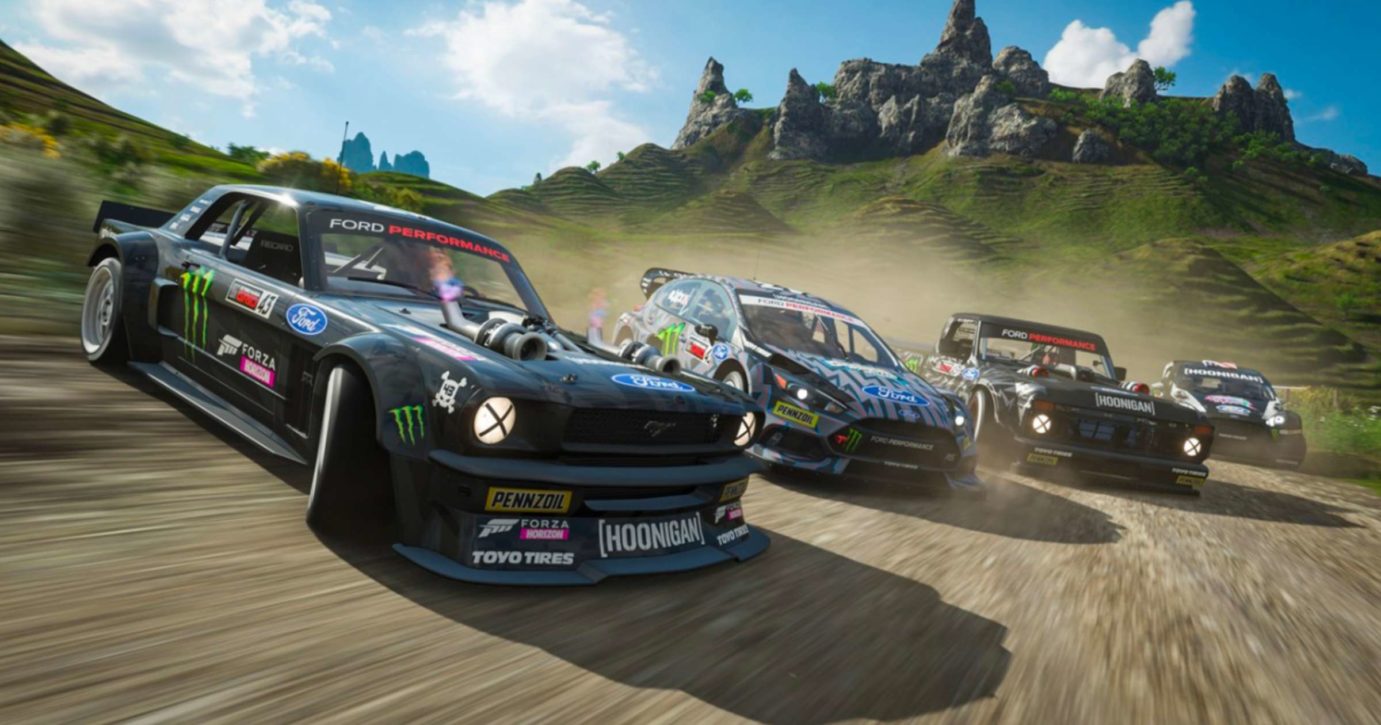 Ladies and gentlemen, start your engines.

Unlike some Xbox genres like RPG games, the best racing games for Xbox are almost certain to deliver pure, real life drama every time drivers take to the track. No matter whether you are an Xbox sim-racing legend or prefer the whacky nature of drifting buggies around dunes, this shortlist of the best Xbox racing games will definitely not disappoint.

Photo finishes that decide winners based on milliseconds, lapses in concentration that allow sharp minded competitors to get the upper hand, and freak crashes that abruptly bring the gravity and danger of the activity to the immediate forefront of the participants’ and spectators’ minds. These are just some of the reasons why Xbox racing games are always a great time.

As an ode to one of the oldest sports/activities in human history, we’ve documented some of the best racers out there on Xbox. From wonderful arcade titles to aggressively realistic and competitive simulators, here are some of the must-buy racing games for Xbox this year.

Fasten your seatbelts. It’s about to get hectic.
– 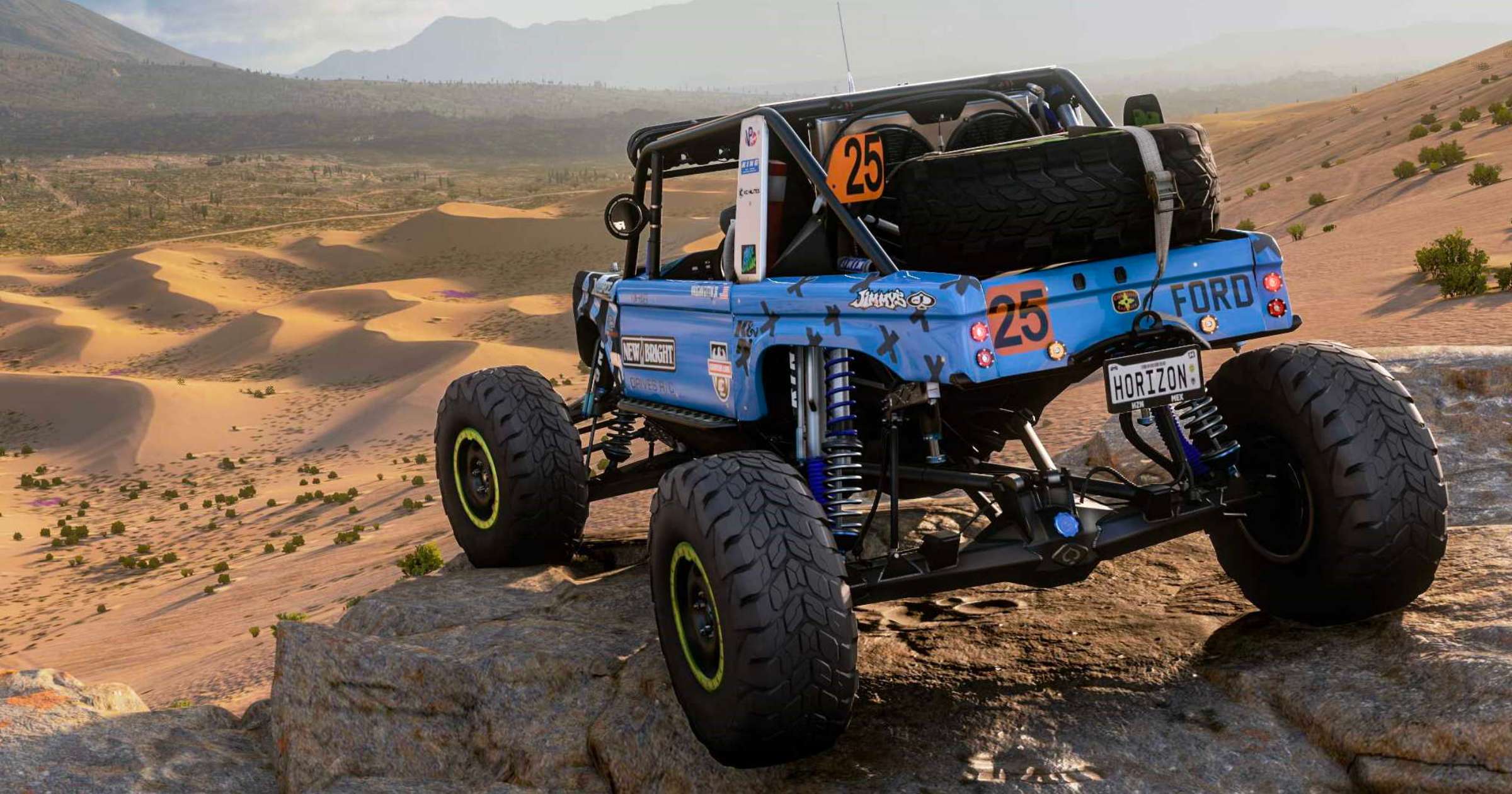 Majestically sleek, wonderfully diverse, and awe-inspiringly huge, Forza’s other series that takes a less serious lens on racing more than makes up for this slight shift from realism with its breathtaking open-world integration. Welcome, to the Horizon.

Commanding the title as of the best racing games for Xbox over the past few generations, Forza Horizon 5 is totally wild and super fun to cruise around the dunes of Mexico.

The game continues to do everything the Horizon series has done well for many years now; the controls are sublime, the cars glisten with even the most minor detail accounted for in almost near-perfect recreation, but the real jewel in its crown this year is the way the team behind FH5 have managed to create a Battle Royale experience in a racing game, which everybody should try at least once.

The map almost steals the show thanks to Mexico’s varied landscape, with elements of verticality much more abundant and unique structures and landmarks like temples and volcanos peppering the environment. 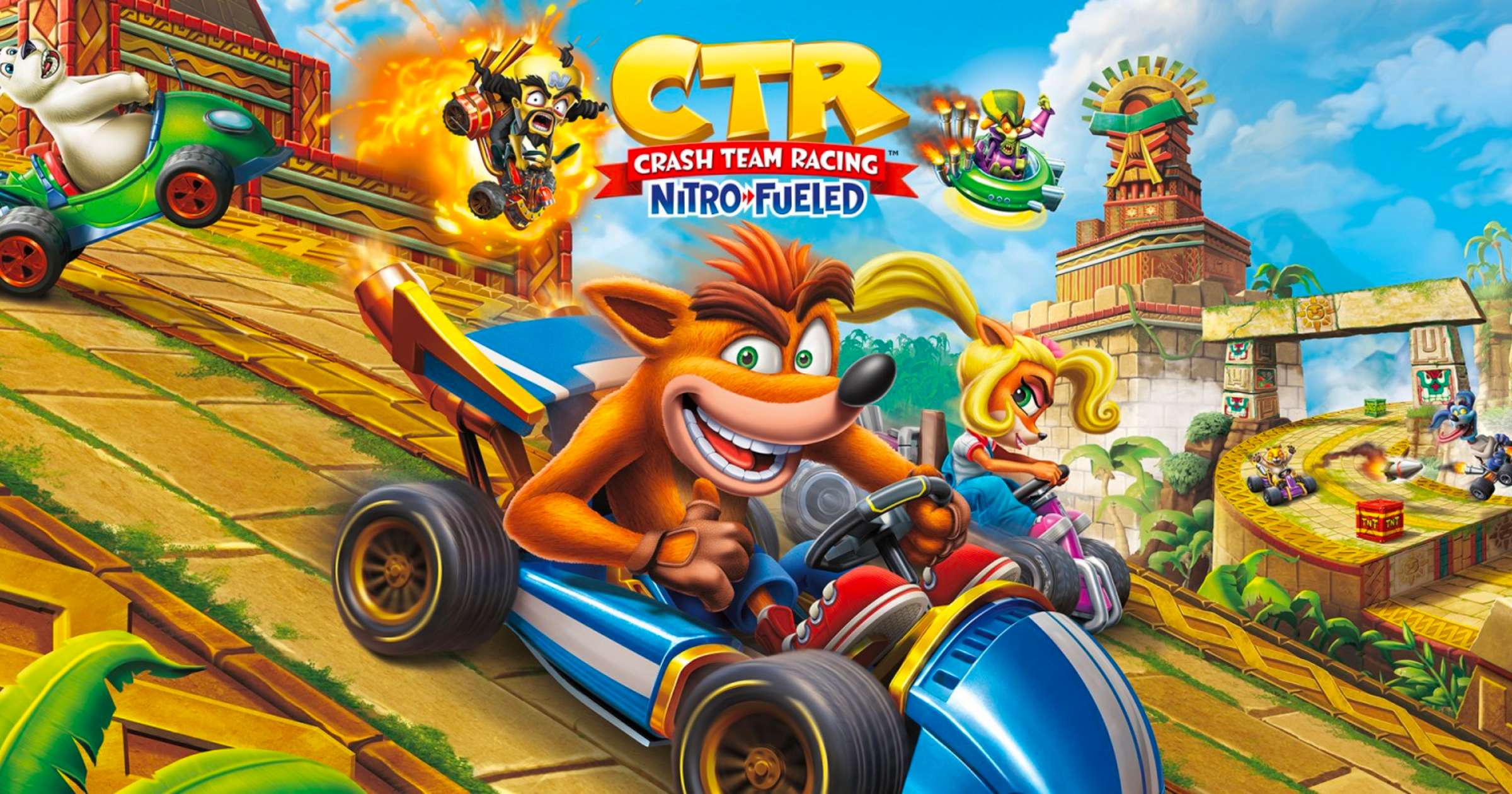 As the only kart racing game for Xbox that can truly rival Nintendo’s champion series of Mario Kart, the original Crash Team Racing continued Crash Bandicoot’s lineage of pristine pedigree games. From the hard-as-nails, unforgiving platformers into the world of Kart Racing with astute aplomb, Crash Team Racing is one of the coolest racing games on Xbox you will come across throughout this shortlist.

The remastered version of the game obviously brings much more pleasing visuals, but graphics are merely the tip of the iceberg. The drifting system has been revamped, the UI cleaned up, and the content expanded to include all the tracks from the less-revered but equally competent sequel, Crash Nitro Kart.

Having all the hallmarks of a Kart Racing title like a Battle, Time Trial, and Versus mode, it’s CTR’s Adventure mode that allows it to have one up over the driving series captained by the Big N’s red overalled plumber.

Oh, and just like almost every other Crash game, it’s addictingly difficult. 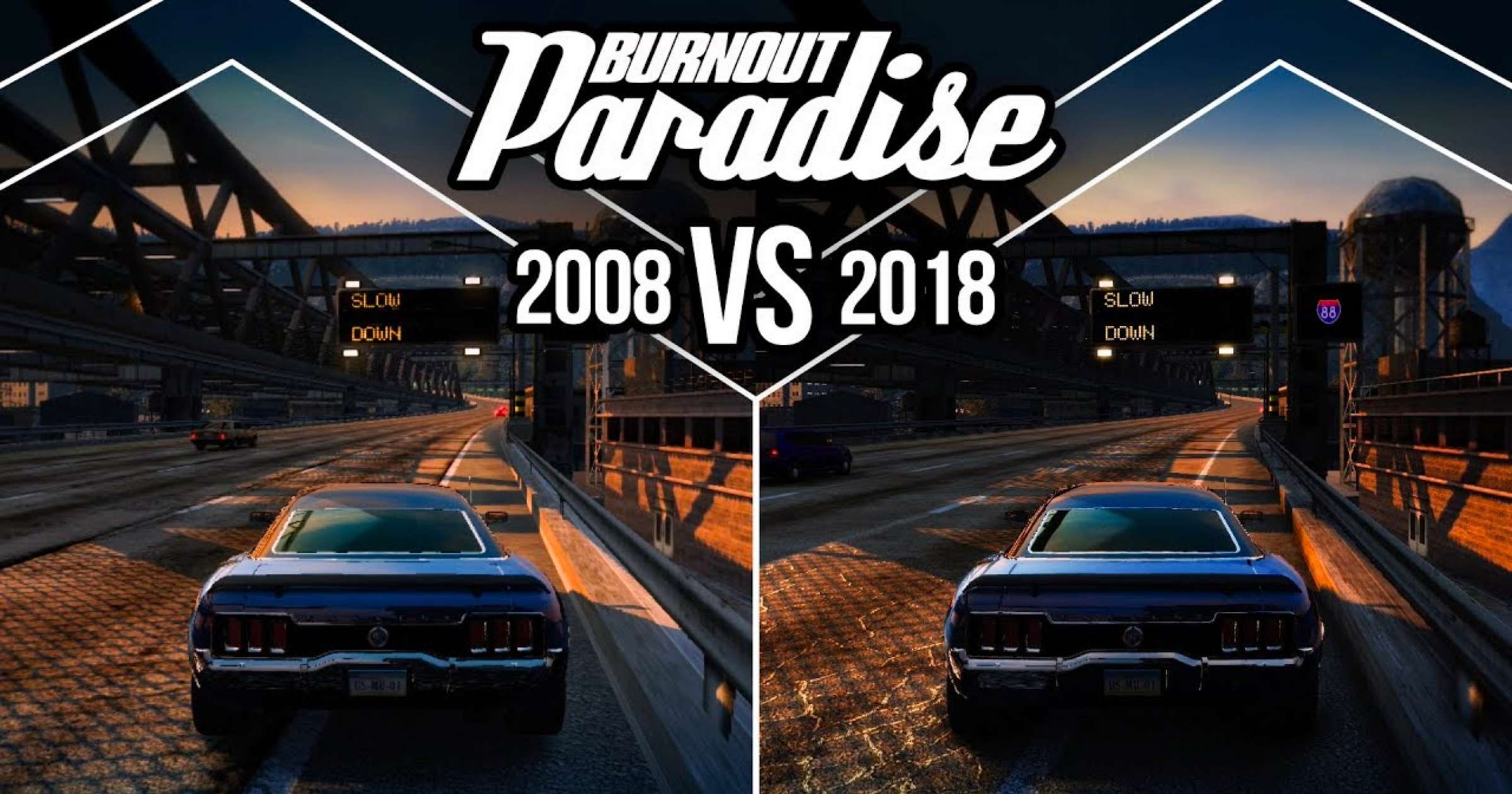 Burnout Paradise somehow manages to deliver top notch gameplay in two genres simultaneously; it is both a fantastic racing game and a tremendous open-world game. In fact, we would go as far as saying that this is the best ever remastered racing game to come to Xbox consoles.

Burnout as a whole has always been known as one of the top tier arcade racing titles, with its ferocious and violent crashes take front and centre of the headline act. In Burnout Paradise, the level of ferocity is retained with destructive majesty while incorporating more dynamic and diverse racing in its aforementioned open-world set up.

For those that missed the original the first time around, the Remaster is a perfect excuse to get your taste for burnout. It is without question a game that will not dissapoint! 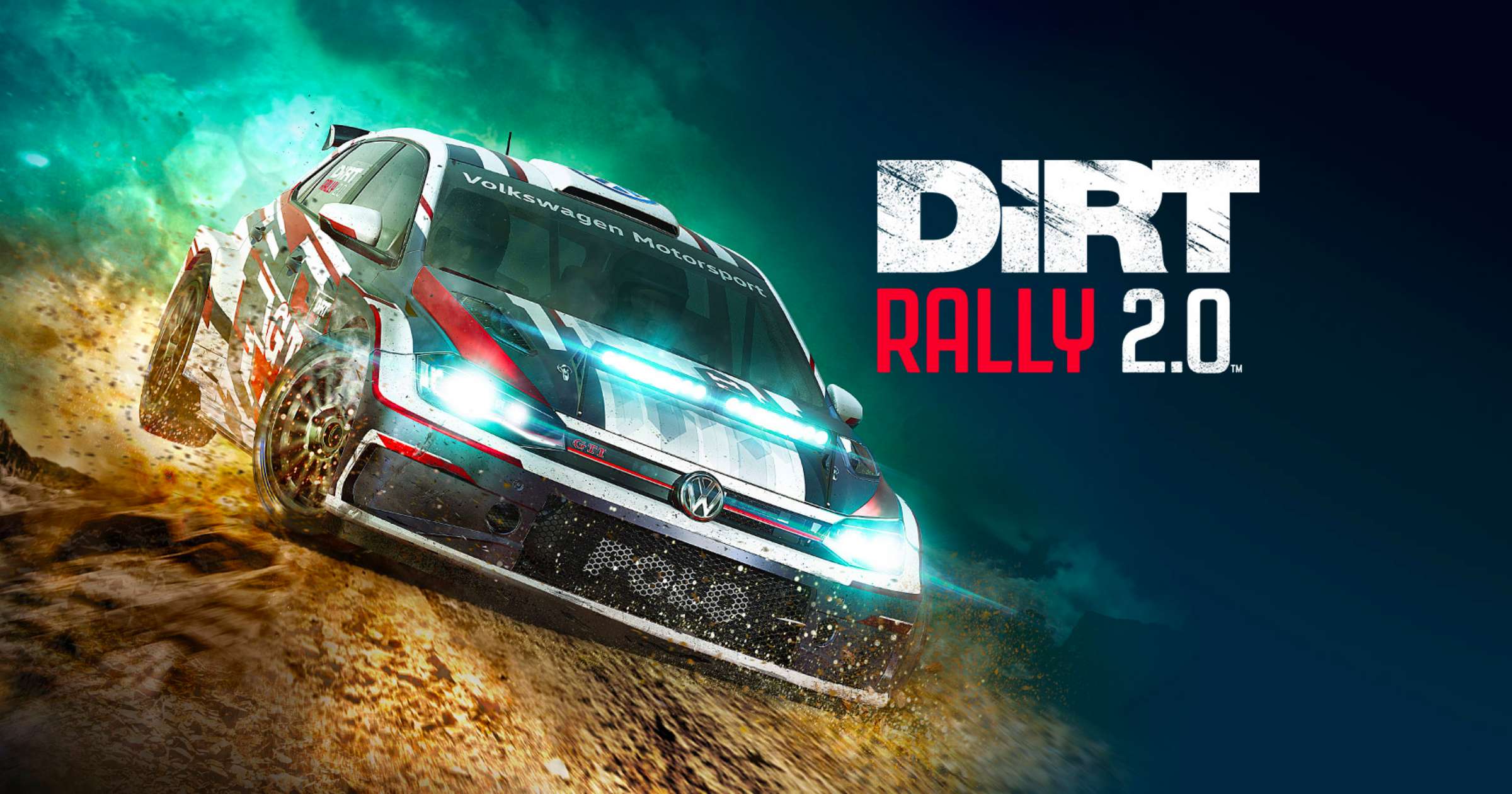 Somewhat of a spiritual successor to the expertly crafted Colin McRae Rally series (along with WRC), genre veterans Codemasters deliver yet another first place finish with their off-road centric racer, Dirt Rally 2.0 in what could be claimed as one of the best racing games for Xbox on gravel.

Despite being a spin-off from the main series, DR 2.0 doesn’t shy away from staking a claim as one of the premier, must-have racing games around. Thankfully, it has lowered its predecessor’s herculean difficulty level by introducing a slider that allows players to fine tune the AI to their exact skill and scale as they go.

Dirt Rally 2.0 is all about honing the craft of off-road driving and is the only dirt track racing games for Xbox one that’s worth considering. The courses (while well designed) can become a bit samey after a while, which is why the focus on building your skill as a driver is more central to your enjoyment of the game.

Dirt Rally 2.0 is a purist experience that should satisfy the hunger of those looking for the genuine challenge of off-road driving. 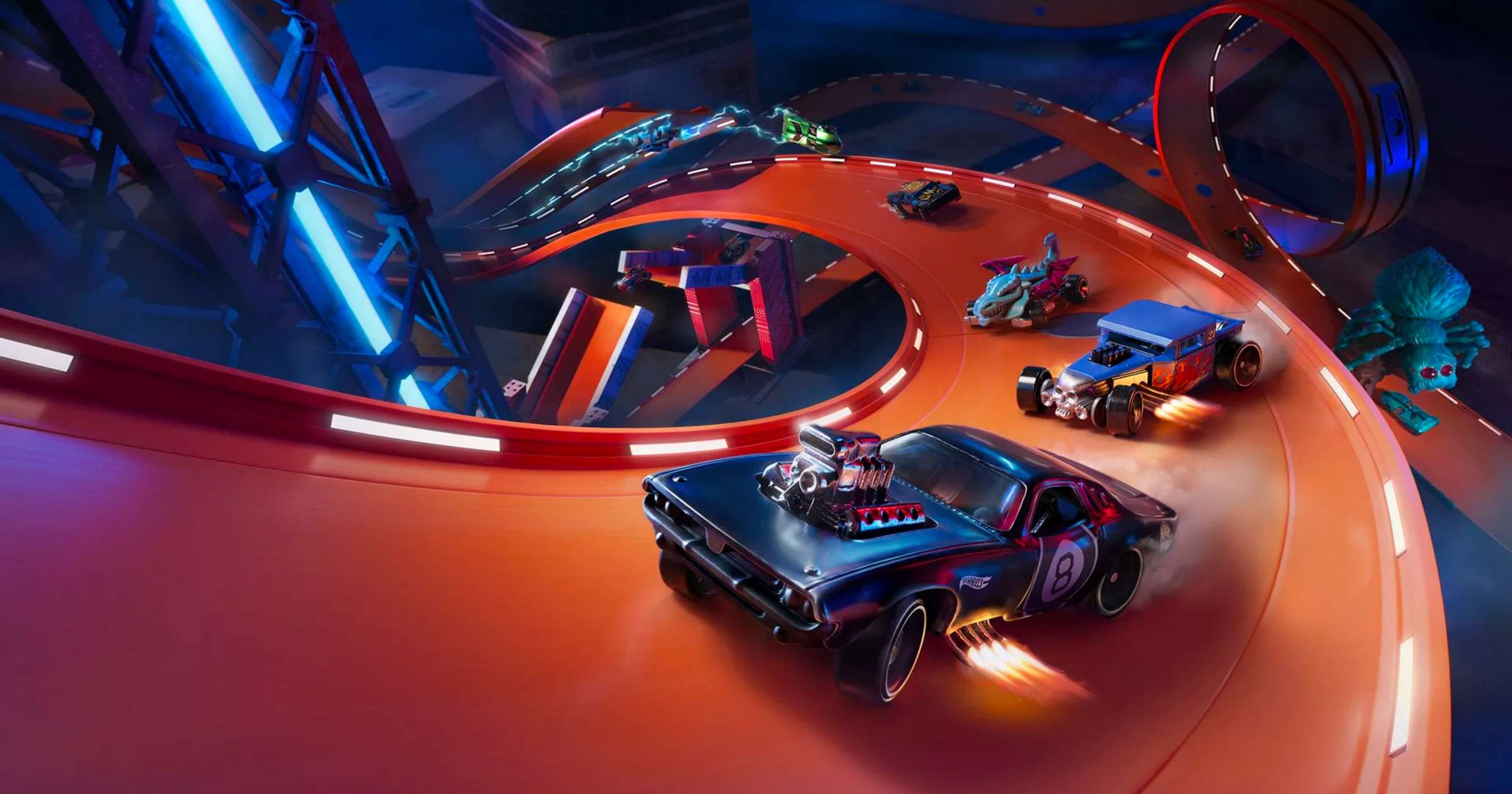 A very recent release that took a few people by surprise with its quality, Hot Wheels Unleashed brandishes the fun factor that brings back the fun of Micro Machines V3 back in the days of the original PlayStation.

With surprisingly crisp controls, a unique roster of both realistic and wacky cars to choose from, tracks full of jumps, loop-de-loops, and hairpin turns, plus a relatively deep and intuitive track editor, Hot Wheels Unleashed is packing a lot of content under its hood. 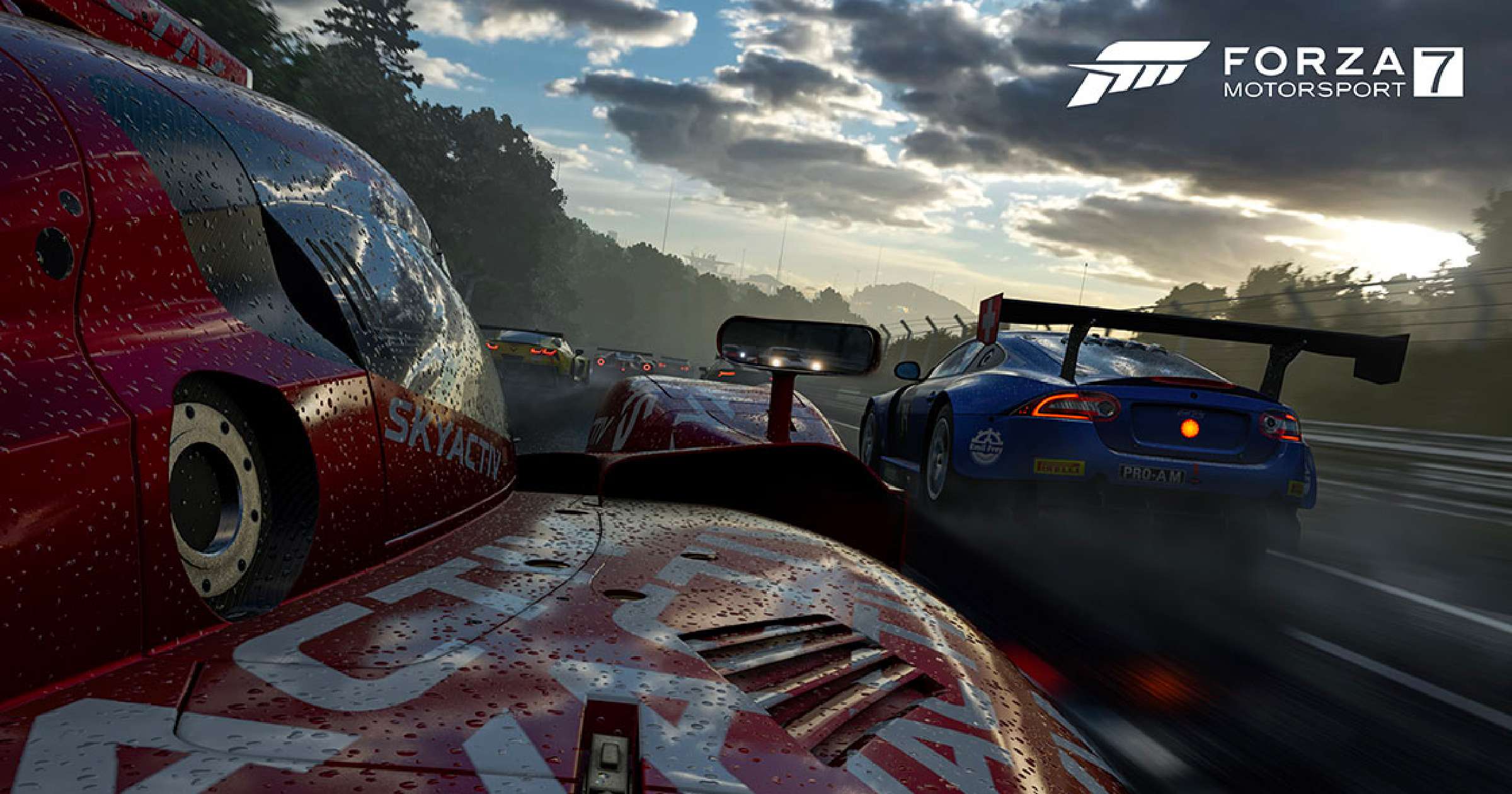 When it comes to racing simulation video games, few titles can get within touching distance of the leader of the pack, namely Forza Motorsport. The guys and girls at development studio Turn 10 periodically outperform and outdo themselves every year, and the last entry in the main series (Forza Motorsport 7) is no different.

FM7 caters for the absolute die-hard petrolheads out there by stuffing in multiple generations of cars, and includes some truly weird and wonderful picks that one wouldn’t typically see on a race track.

A word that always crops up when discussing Forza: detail. The level of detail featured in Forza Motorsport has always been the absolute top of the line, with accurate speedometers fluctuating wildly during the race and windscreen wipers smearing the faintest hue on the windshield after driving through water.

Forza Motorsport is just the racing series that every true racing game fan needs to have in pole position in their collection. 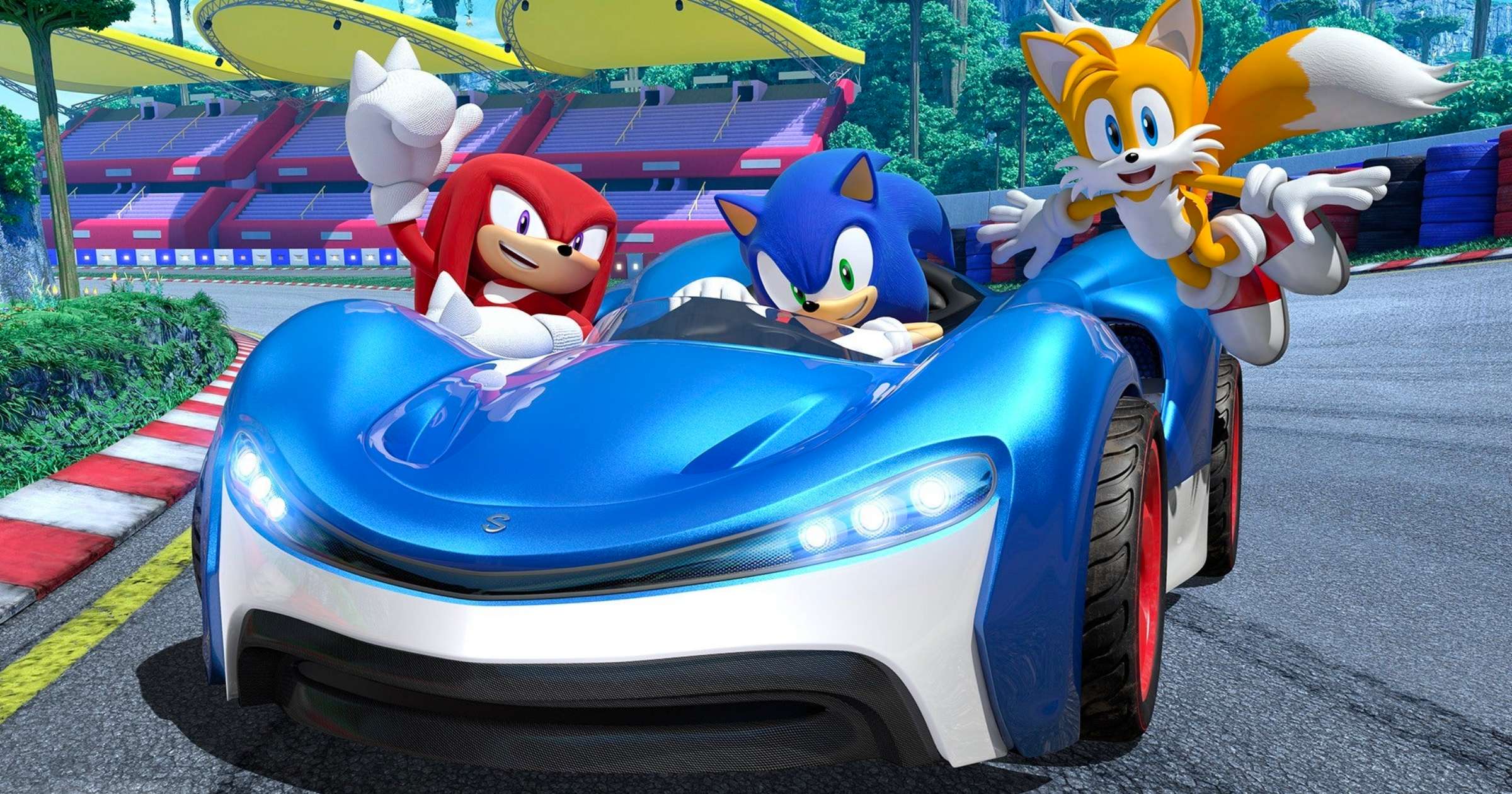 Sega’s dive into the Kart Racing genre is equally as sound as likewise competitors Crash Team Racing and Mario Kart, and is most certainly not a game to be ignored. If you really are not a fan of Crash Bandicoot, then Team Sonic Racing is by far the next best kart racing game for Xbox.

Being that it is partially removed from the “classic” Kart Racers, Team Sonic Racing differentiates itself as something more akin to the legendary Diddy Kong Racing thanks to its multi-vehicle mechanics and terraforming courses.

It may not be as precise or as technical a racer as its contemporaries, but TSR makes up for this shift away from gear-shifting acumen by providing a selection of vivid courses with a popping colour palette that delight the eyes and ears as well thanks to the beautifully nostalgic Sega soundtrack.

The level of vehicle customisation and upgrade parts is also a nice shift towards very light but welcome RPG mechanics. 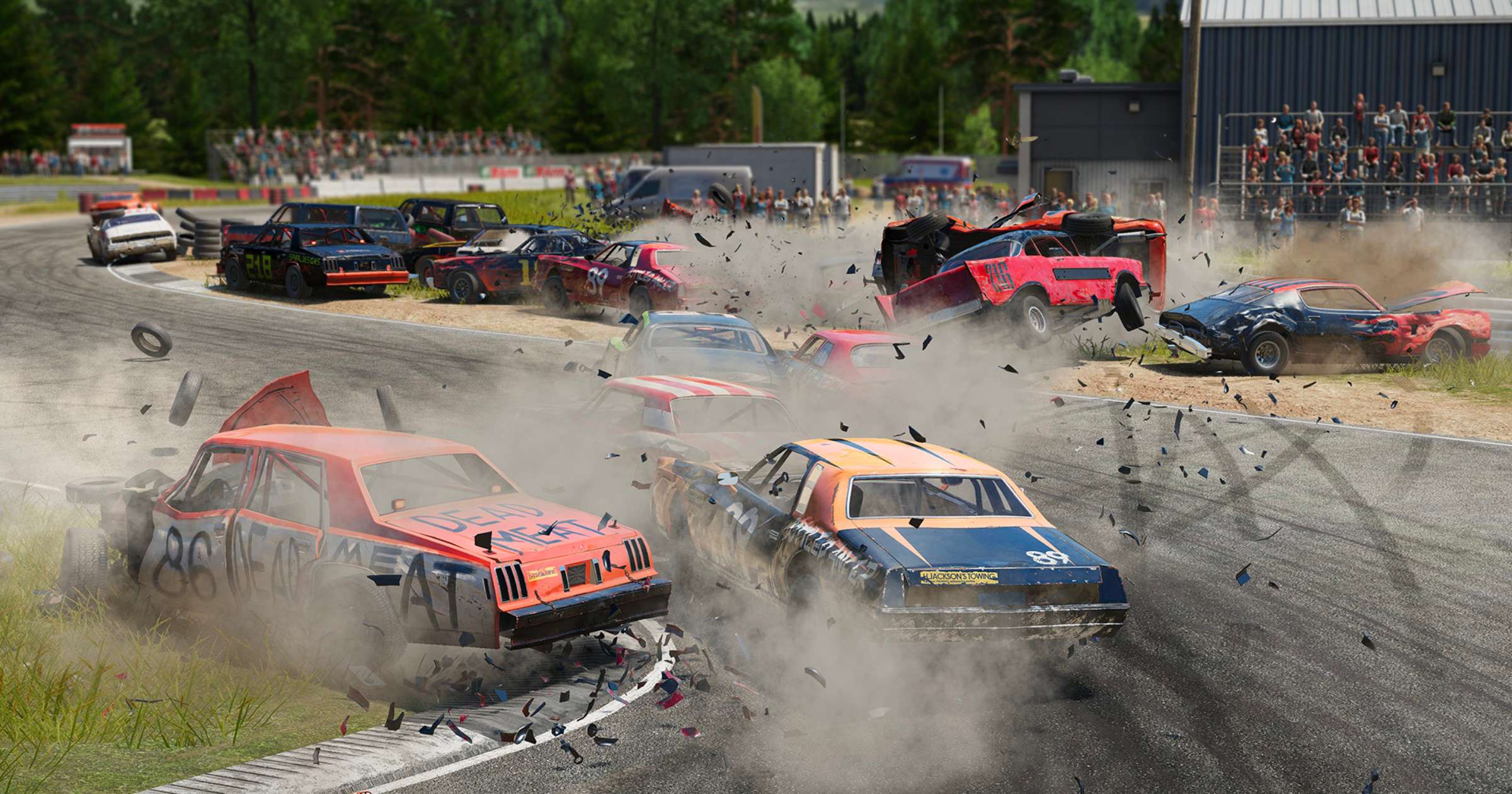 Not so much about the racing as it is about the crashing and totalling as many cars as possible, Wreckfest takes one look at the well-polished exterior of racers like Forza and Burnout, puts on its sunglasses and has a shot of whiskey before getting behind the wheel.

Conjuring memories of the beloved FlatOut and Destruction Derby games, Wreckfest is a chaotic slugfest that acts as a swift gut punch to the genre before giving it a wedgie. It ain’t pretty, but gosh darn it’s fun to play.

The game doesn’t solely focus on destruction however; the actual driving still requires mastery. After all, you can’t crash into someone if you can’t catch them.

Wreckfest is great because it rewards the duality of players. A satisfying feedback loop for those who like to powerslide around corners, and a luxurious dopamine hit for the indulgent violence one experiences when t-boning another racer. 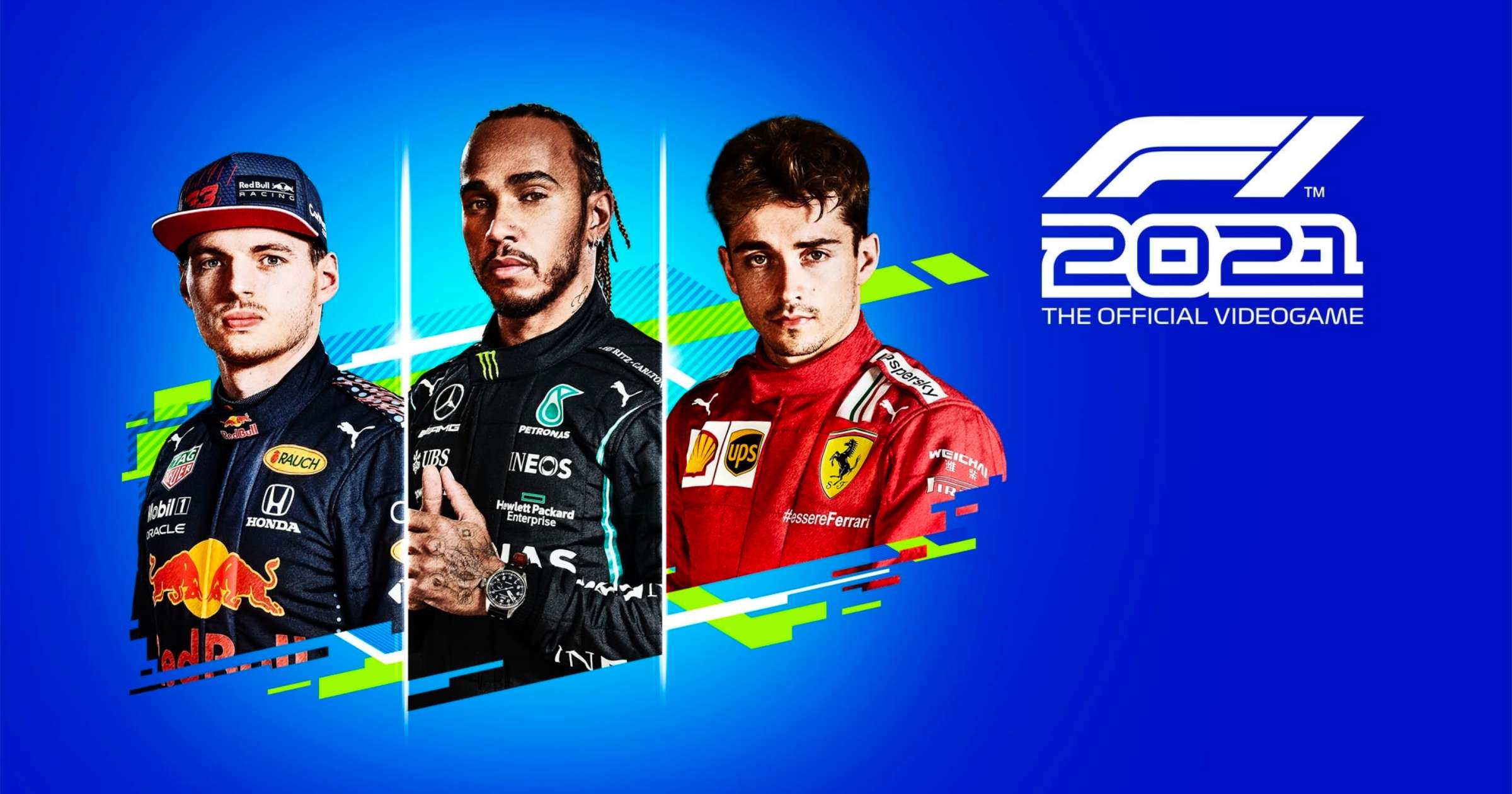 Now I will admit, Formula One really isn’t my area of expertise, so when it comes to this particular type of racing, I am much less-versed than something like Wreckfest or CTR.

The internet community however seems to adore the F1 gaming series, especially F1 2021, possibly thanks to its My Team mode which captures the burning rivalry between the sport’s illustrious car manufacturers like Ferrari, Mercedes, and Red Bull Racing.

Rather than picking a faction to join, you enter into the world of F1 as the new team on the block and look to have a meteoric rise to chequered flagged glory as the dominant force in the era of F1 racing.

It’s the depth of this mode combined with F1’s consistently stellar and fluid driving mechanics that keeps fans of the sport applauding with every entry.

Even if you are not the next Colin McRae, any one of these incredible racing games on Xbox will keep you entertained for hours upon end. While some deliver phenomenal storylines such as that of ‘Aiden Jackson’ in Formula 1, others are a pure PVP multiplayer fiascos. The pace in which you want to play is solely down to your own preference.

To get the most our of your racing experiences on Xbox, we highly recommend that you invest into a steering wheel such as the Logitech G923 for added realism. Failing that, controller players have a distinct advantage on the majority of racing simulators when it comes to side by side racing. So, no matter whether you are wheel to wheel around copse corner or drifting in Mexico, controllers have a distinct advantage.

Did we miss any of the best racing games for Xbox? The GRID?

Tell us about your favourite racing Xbox games and racing simulators in the comments below. Meanwhile, feel free to check out some of our other incredible articles. 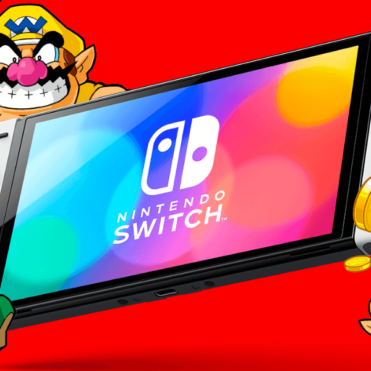