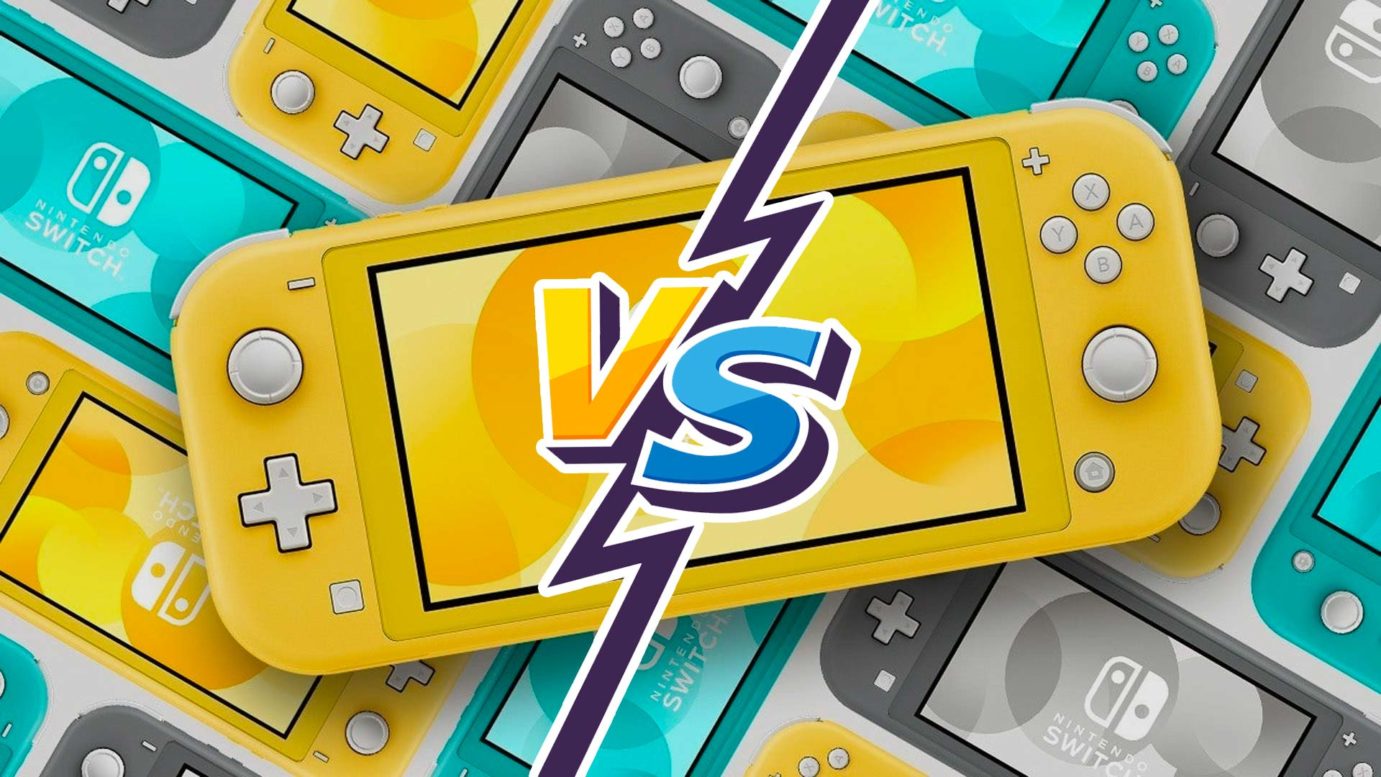 You might be wondering why the featured image for this article is the same product on both sides. Well, when comparing the differences between Nintendo Switch and Nintendo Switch Lite, they are almost identical in physical appearance.

If you are shopping for a portable games console, you may have your eyes on the Nintendo Switch. With this, you have 2 options to choose from with the versatile Nintendo Switch or Switch Lite and its dedicated handheld nature. Choosing between the two can be a big decision and therefore we have assessed the pros and cons of each device.

So, without further ado, scroll down to watch the showdown unfold with this Nintendo Switch Vs Switch Lite review as we pit two of the best consoles to come out of Nintendo head to head.

Gather your weapons, it’s about to go down. 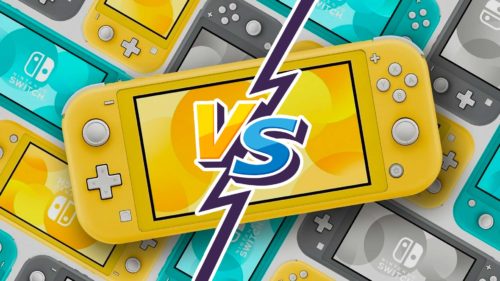 Eluded to above, there is a scarce difference in the design of the Nintendo Switch over the Switch Lite. Both come with vast colour options and, other than the physical size, you could mistake the Switch for the Switch Lite when the controllers are attached. Simply put, the Switch Lite is a lighter and more portable version of the Switch.

For physical presence, although the Nintendo Switch is not exactly large, some players may struggle to fit the original smoothly into their pockets. Therefore, the Nintendo Switch Lite, despite being unable to actually switch, is much better for when playing on the move. 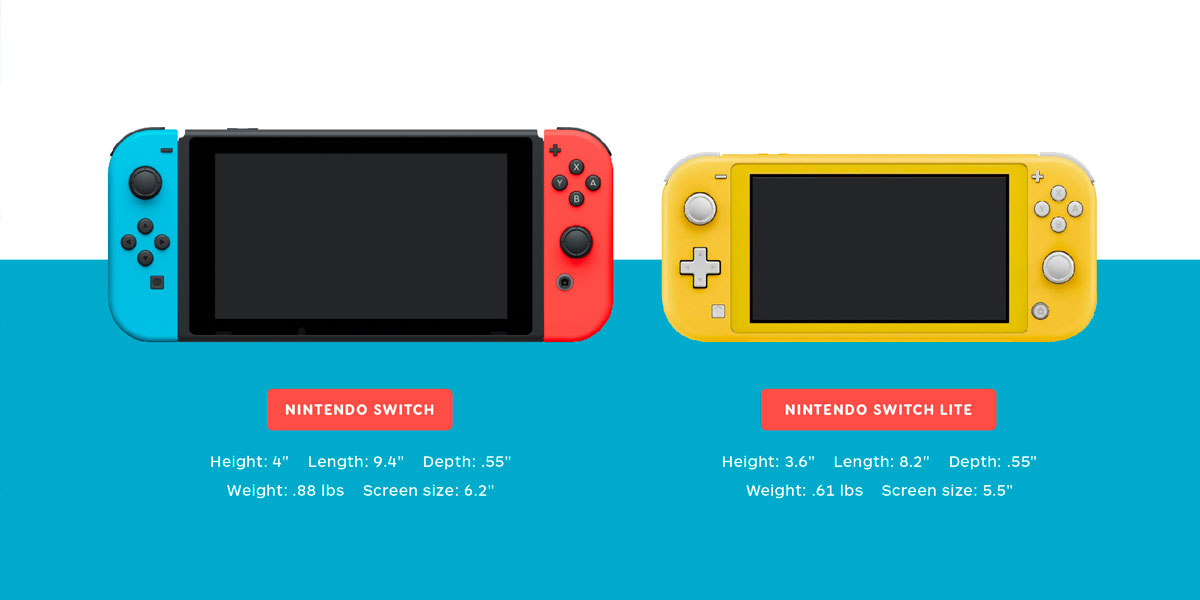 Although bigger screens usually result in better gameplay (except for competitive FPS), we actually prefer the petite nature of the Switch Lite. The reason for this is because the Switch Lite makes use of thinner bezels and a more uniform design. This results in the screen looking much more seamless.
–

When comparing Nintendo Switch Vs Nintendo Switch Lite specifications, there is not much to separate the two. Both consoles are powered by NVIDIA Custom Tegra processing and present gameplay with a resolution of 1280 x 720 pixels.

The Switch Lite has a few hours longer battery life than the early versions of the Switch, however, this was rectified with later models. As for the physical size and price, the Switch Lite is smaller, lighter and cheaper to purchase.

With both the Nintendo Switch and Lite embodying the same processing power, similar battery life and colour options, the overall performance of each device will be parallel. The biggest factor here is once again the price difference with the smaller and more portable Switch Lite being the better option.

Further to that, not all Nintendo Switch Games can be played on the Switch Lite and therefore this is a consideration before you purchase.

Editor Note: Only the more recent Mid-2019 Nintendo Switch comes with 4 to 9 hours battery life. As for earlier models, players should expect around 2 to 6 hours of gameplay.
– 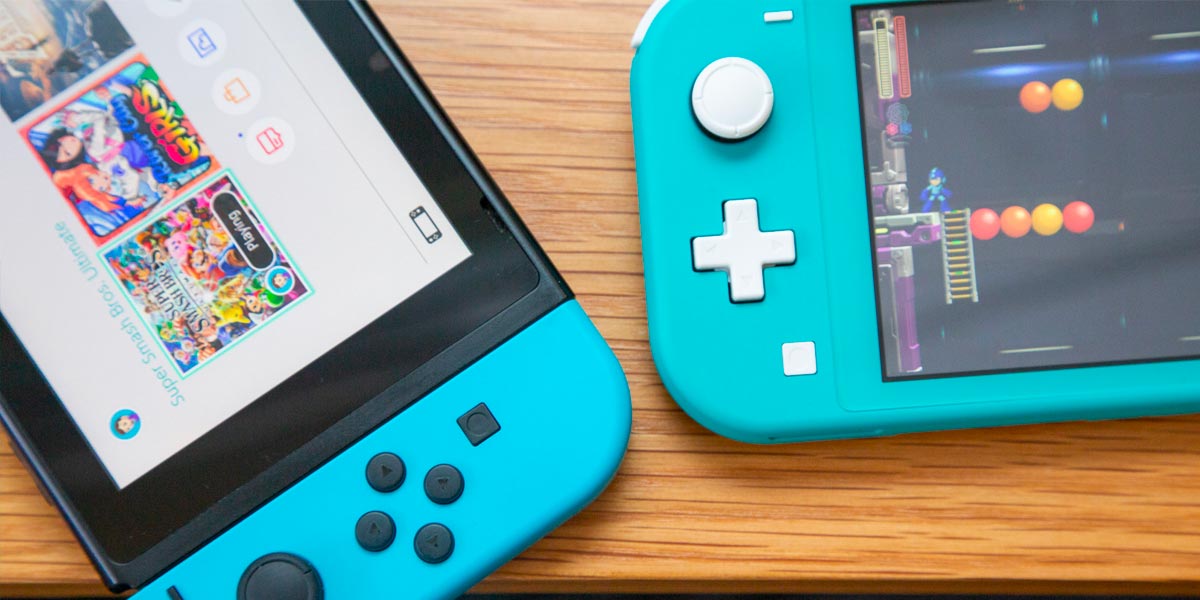 Should you really want the Switch Lite but would dearly miss the TV mode, there is a workaround. By pairing your Joy-Cons or Pro Controller with the Switch Lite, you can still enjoy local multiplayer so long as you can prop the Switch Lite up.

When comparing Nintendo Switch Vs Switch Lite games, you are limited to handheld only games on the Switch Lite. Although the thought of limited games might be a huge downturn for the Switch Lite, this is not the case. Nearly all of the same games are playable on both consoles. Therefore, you can still enjoy huge titles such as Super Mario and The Legend of Zelda.

Yes, a few games will not be playable and you cannot port to your television. However, with such a vast library of some of the best switch games in recent times, you will not be short for choice. The performance is almost identical and you may enjoy the more tactile console. When choosing between the Nintendo Switch or Switch Lite, carefully consider whether the additional ways to play using the Nintendo Switch are of importance to you. If not, it’s time to go light.
– 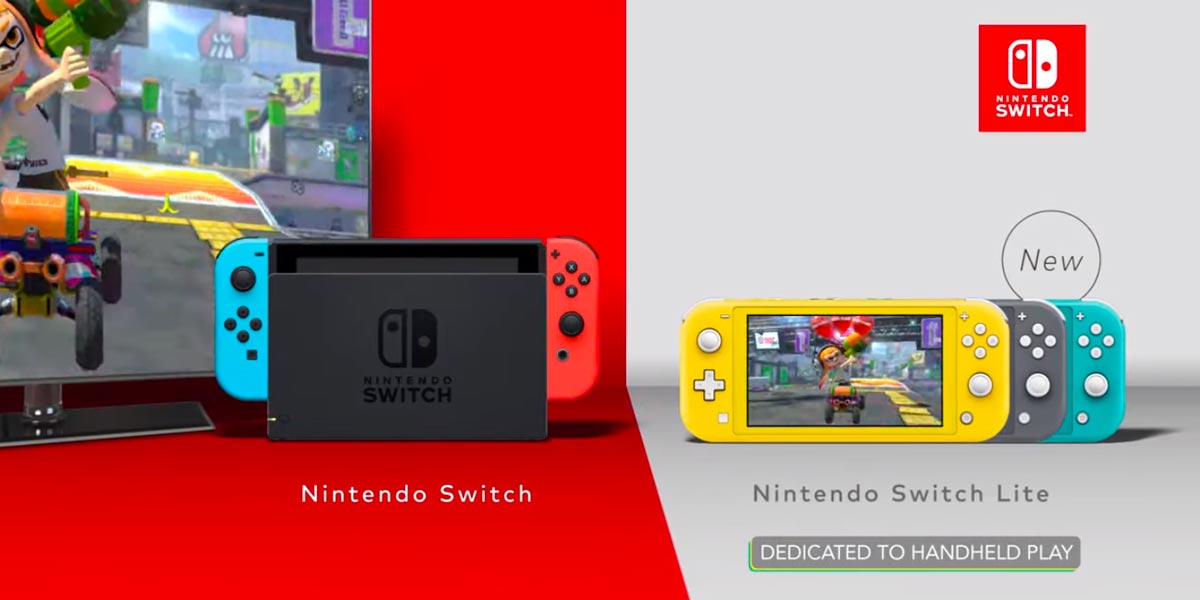 For those of you who like to play games on your TV, the Nintendo Switch is your only option as the Switch Lite does not come with this functionality. Ultimately, the core concept for the Switch was that the device could switch from handheld to TV gameplay. But, the experience is still stellar without the big screen.

Are you team Switch or Switch Lite? Share your comments below.

Are you still undecided between the Nintendo Switch & Switch Lite? Here are some of the most commonly asked questions that will hopefully help you make the right decision.

As you will notice, the majority of these games require plenty of movement and therefore cannot be played without joycon controllers. You are going to struggle completing fitness adventures with just your switch after all! 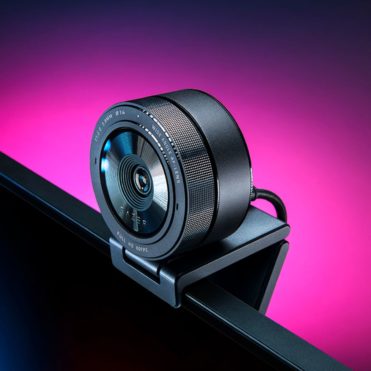 Razer Kiyo Pro Review 2022: Worth The Upgrade?
Got an opinion?
Leave us a comment!