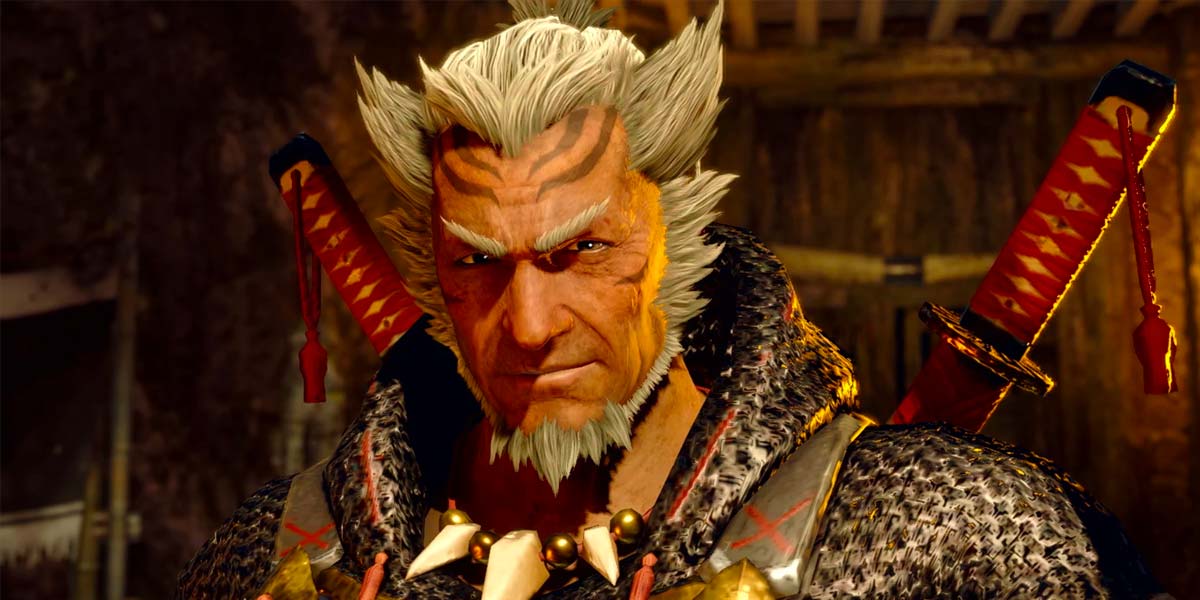 Everything you previously enjoyed, but much improved.

Monster Hunter has always been a highly praised and well-followed game series. Even during a time when it was mostly a niche game in the West, its engaging combat and intense hunts made it a unique and special game of its own. Now that the series enjoys a much broader appeal thanks to World, it’s ready to take things to the next level.

Monster Hunter Rise is that next level. With a focus on more fluid combat, more approachable storytelling and new ways to enjoy the Monster Hunter experience, this is definitely the best of the series yet. 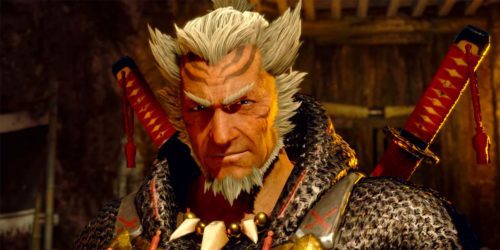 Oh, when you’re done. Don’t forget to leave us a comment with any questions or thoughts you have about the latest instalment. Now, enough preamble, delve into our Monster Hunter Rise Review below. 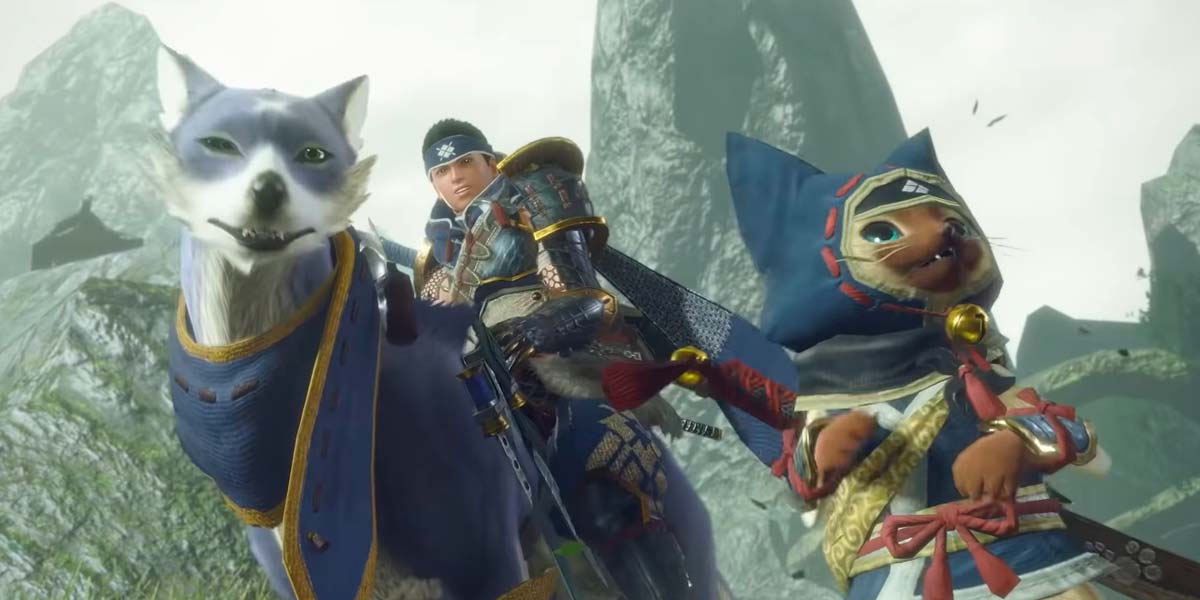 As series veterans, what grabbed us immediately was all the cool new tricks, options and attacks at our disposal. The addition of the Palamute and Wirebugs, in particular, drastically change the flow of battle for the better. Besides being AI partners, the trusty pooches are also mounted both outside and inside of combat. Of which, the latter is actually quite important.

At any point, you can sheath your sword and immediately mount your Palamute to race around the battlefield so that you can reposition yourself. On top of that, you can use any items you want, including sharpening your sword. Once you’re all topped up and ready to go, you can dash back into battle.

Wirebugs give you a few cool tricks to use as well, including an air recovery that puts you back into action after taking a big hit. These two additions combined make Monster Hunter Rise’s signature giant monster battles feel more fluid. When you factor in the various new Silkbind attacks that open up a range of bone-crunching attacks and table-turning counterattacks, you can’t help but feel that this is the product of years of design refinement. And it doesn’t all just stop there.

The world of Monster Hunter Rise is also one of the series finest to date. This time around, we take on the role of a Hunter of Kamura Village. As in past iterations, there are monsters that are threatening the village’s denizens but throughout Monster Hunter Rise, that threat is compounded by an event known as the Rampage. These involve a series of horde-mode style defence quests where you eventually fight Apex monsters and one of your fiercest enemies yet, the sinister Magnamalo.

As with Monster Hunter World, the key characters in Rise are voice acted. By comparison, they are some of the most memorable in the series. Every character, from the lively and spunky Dango master to the twin quest givers, brims with personality. It’s a point that past Monster Hunter games have struggled to get right. We are so glad they have put more love into this aspect of Rise.

Kamura Village itself is also full of its own personality. With its Japanese-inspired design and flair, you feel like you’re in the samurai edition of Monster Hunter and it works tremendously well. 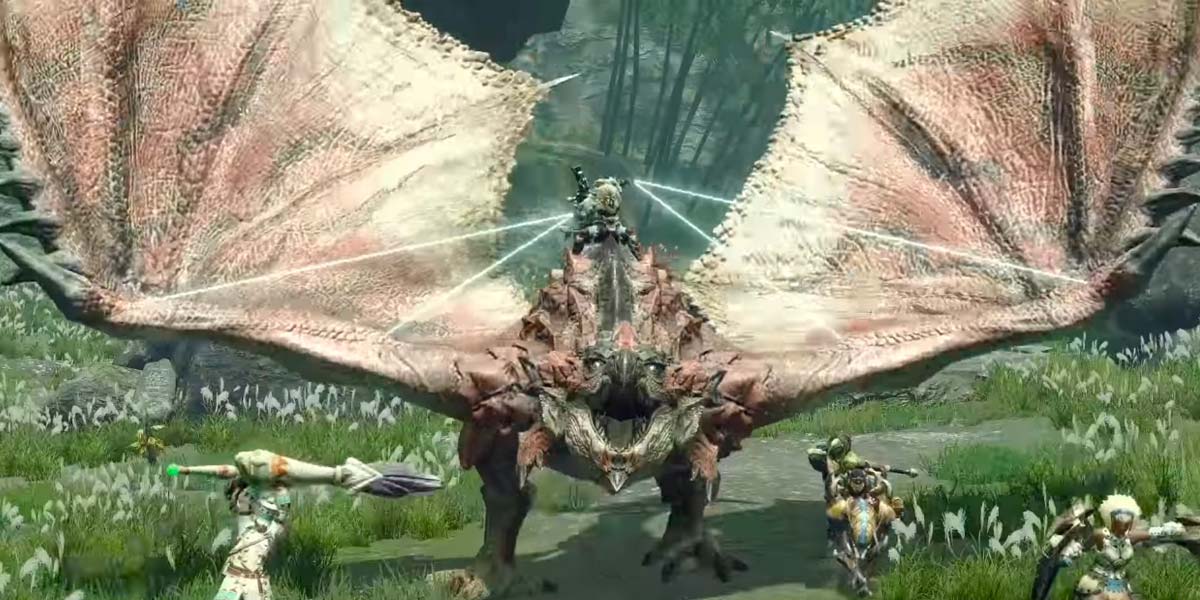 Speaking of visual design, I have to say that Monster Hunter Rise is a bit of a miracle game. For one, it looks incredibly crisp with high fidelity cartoony visuals.

What makes this a miracle is that it looks this impressively good and performs superbly on the Nintendo Switch even in handheld mode. Not once have I noticed a significant dip in frames, even during the Rampage quests where multiple monsters and characters can be on screen at the same time.

This is particularly important when you factor in how well Monster Hunter games work as portable games on the Nintendo Switch. Their quest structure lends itself well for on-the-go gaming (wherever you may be…going) and Rise’s new gameplay additions and mechanics make that even more possible as battles feel shorter in length.

The music and sound design also blend very well with the classic Japanese aesthetic of the game. I particularly enjoy the haikus that introduce each monster and I’ll never grow sick of the bunny dango theme song every time I sit down for a bite.

If you’re a veteran reading all this and thinking that the game is catering to a newer crowd, then you can rest easy. Monster Hunter Rise is every bit the Monster Hunter you have always liked. The HR quests are always where it’s at to test your skills as a Hunter and Rise brings the challenge in spades. In fact, it feels like monsters are tuned with the traversal mechanics and Silkbind attacks in mind because some encounters are pretty hard at the toughest missions.

But even when things get really challenging, playing with friends is easier and more fluid than ever. The new Hunter Connect system in Rise makes it dead simple to create or join other people’s hunts, finally putting the keyword system from past games to rest. Online play has been smooth and with very few instances of lag. Thanks to the new map system and the open-world nature of Rise’s maps, staying with your group and finding your mark has never been easier. 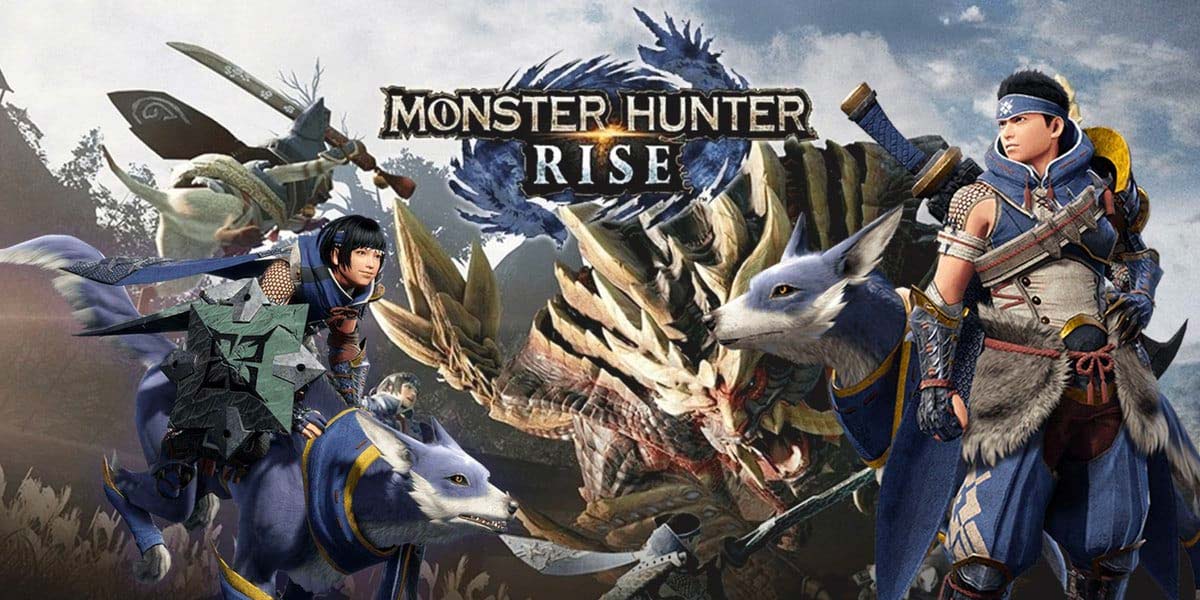 Is Monster Hunter Rise Worth Playing?

As a game that’s been clearly developed to align with a variety of taste buds, Monster Hunter Rise is an action RPG game that’s definitely worth adding to the list. While far better to enjoy on PC, the Nintendo Switch version is also still a lot of fun and will potentially go down as one of the best monster RPG games of a generation.

No seriously, it’s that good.

To summarise this Monster Hunter Rise review, we would argue that this game is your typical Monster Hunter experience but for a broader audience. At the same time, the core DNA is completely uncompromised. With new combat mechanics and features elevating hunting and exploring to new heights, this has created an extremely enjoyable game suitable for veteran fans and newcomers alike.

Better still, Monster Hunter Rise carries on the tradition of not having too many microtransactions. New monsters are released for free with a few cosmetic items being obtainable for a small price. The one nit-pick we have is that Capcom has made re-creating your character a paid service, with the first time being free. You can still change hairstyles and other aspects anytime you want, though.

Either way, Monster Hunter Rise is an unmissable experience. And if none of the past titles failed to entice you, then this one might finally be the MH game that will get you into what I consider to be one of the best video game series of all time.

Content Disclaimer: This Monster Hunter Rise Review is independently written. We have not been commissioned by Capcom, nor have we received any royalties for this article. This includes financial reimbursement, free advertising or Monster Hunter for Switch.

Should you click on any link to Amazon and make a purchase, we may receive a small commission. But that’s just how we keep this website alive! Feel free to hit us up in the comments. We would love to answer any questions about this MH Rise Review. 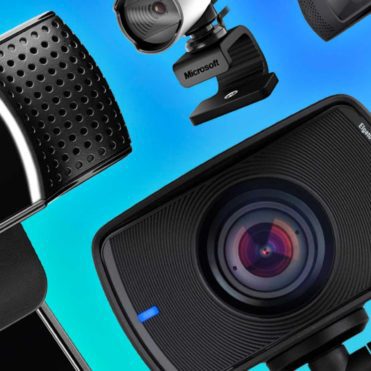