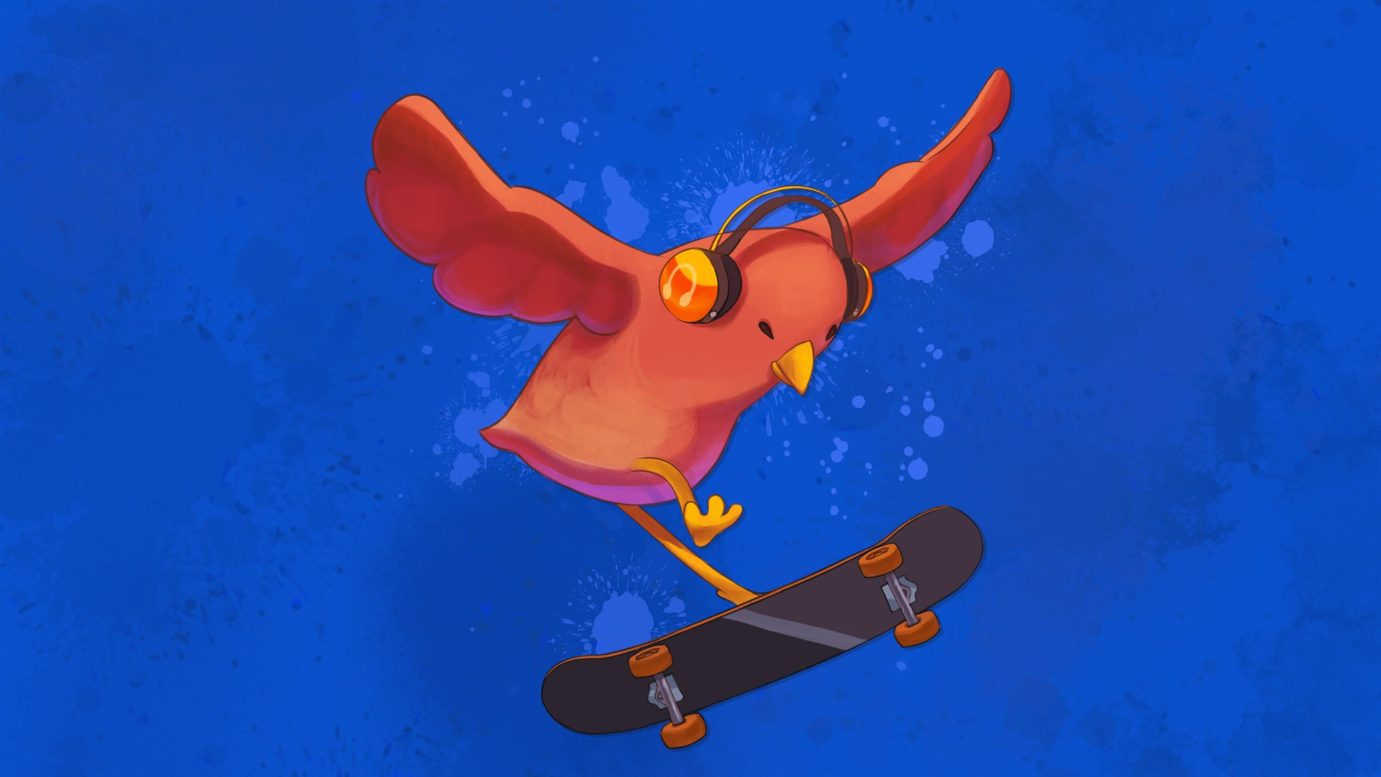 They took a mighty swing and missed. But that's okay.

Writing this SkateBIRD review was tough. We honestly wanted to love this game so much but absolutely cringed at some of the production. For a few hours at most, SkateBIRD was crazy funny. Nevertheless, here we are completely ripping into an intelligent concept that should have taken flight.

As cute as the cover may seem, SkateBIRD is marred with flaws. However, beneath the absurdity, you will find comfort knowing that this game is totally free on the Xbox Game Pass. It comes with a cool soundtrack and will, for a while, be somewhat a hoot. 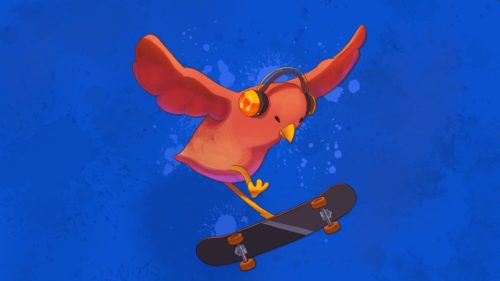 As a dupe of the Tony Hawk Pro Skater series, we cannot decide whether Glass Bottom Games intentionally designed SkateBIRD to be bad or whether they just run out of production budget. Think Tony Hawk meets Micro Machines meets the original Pokemon on Gameboy Colour. It’s an arcade kick flipper that plays out more like a PS1 game than a modern-era skateboarding simulator.

Discover why with our Skatebird Review for Xbox below.

When you’re done, don’t forget to hit us up in the comments! 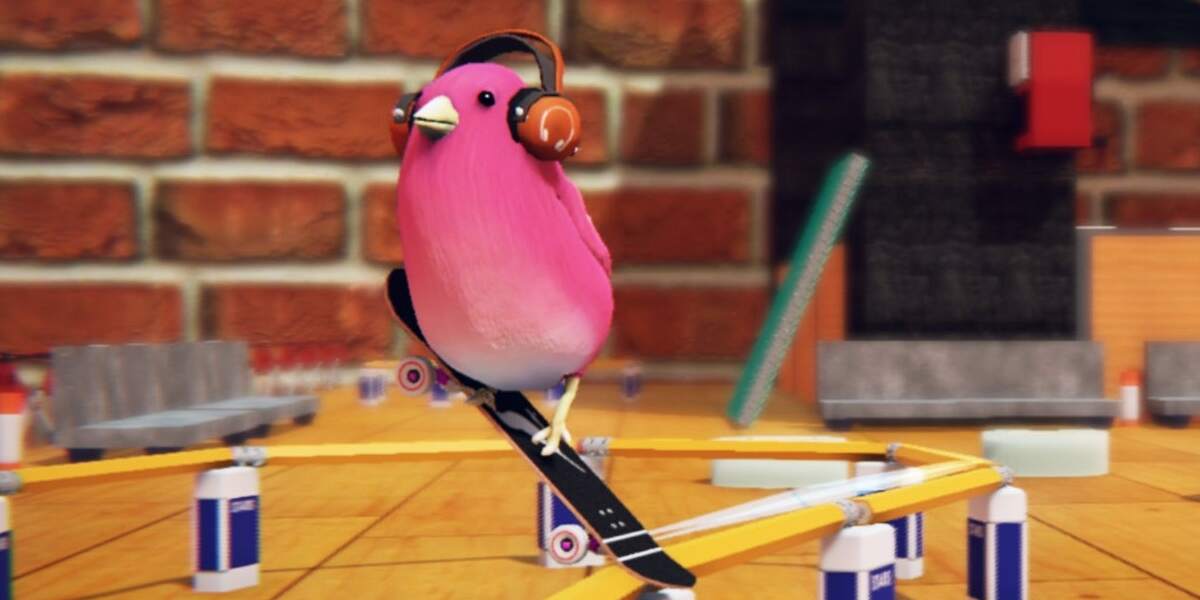 With indie games, you typically trade the production budget for phenomenal storytelling. And yet, SkateBIRD produces neither of them very well. We’re talking skateboarding birds here. The storyline could write itself ten times over by the time you’ve finished reading just a single SkateBIRD review.

Unfortunately, although sweet, the storyline is quite flat.

Centred around your new (and moronic) feathery friends, your mission is to help your human, “Big Friend”, by completing levels and quests that unlock new skateparks. Without too many spoilers, that’s literally the premise of the game. Completing quests unlocks more levels and you cannot proceed until you’ve done them all. That’s it.

There’s some fun dialogue that pushes you along but as you can probably tell by now that the storyline is very bland.

Even the name “Big Friend” is a little weak.

As for the quests themselves, they are your typical “collect 6” or “touch this” that a lot of skateboarding simulators produce. After some time, you realise that nearly all of the quests are based upon the same principles (just with a different variation). This makes the game become diluted very quickly. In fact, borderline tedious.

Regardless of that, you have to take off your critics’ hat for a moment and just enjoy your grammatically challenged skate pals. Whether this is a jibe at the skate industry or even birds themselves, you’ll quickly understand that your new friends are not the smartest.

For that, we love them even more. 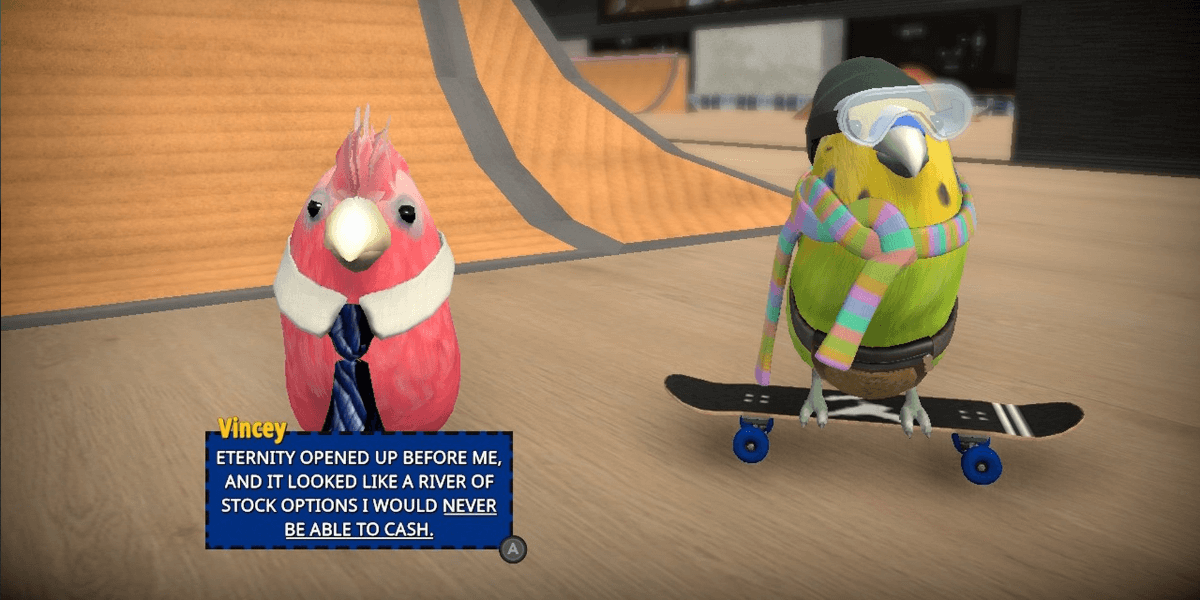 Once again you should expect bugs and glitches with games that come out of smaller production studios. In fact, you learn to fall in love with them.

Get ready to have your patience tested.

One massive gameplay positive is the ability to create your own bird. If you were not a bird fanatic before SkateBIRD, you will definitely harvest a new appreciation for them. SkateBIRD takes predators that could be considered as evilness in the sky and transforms them into dope-ass skaters with cool ties and ripped jeans. All you have to do is decide whether you want your bird to be cute or cool.

Unfortunately, from here, the game then falls apart – In fact, it completely stacks.

Landing a trick is nothing but a roll of the dice. The controls are finicky, the camera angles are awkward and by golly can someone please fix the tightness of them turning circles!? These are punk-rocking nimble birds, not behemoth elephants!

But again, there is something just so undeniably great about every single one of these flaws when popping smith grinds as a cockatoo wearing Gucci. It’s like the game knows it’s terrible, knows you will forgive it for being so and just leans straight into that!

On brighter tones, there’s actually a lot of imagination with the gameplay of SkateBIRD. From funny fake issues of Thrasher to straws serving as coping, the game is cute and made us smile. Not to mention that you can hold tricks midflight for longer as your custom predator flaps its wings for longer airtime. This might seem like an obvious edition but there has been so much missed from this game, we wouldn’t be surprised. 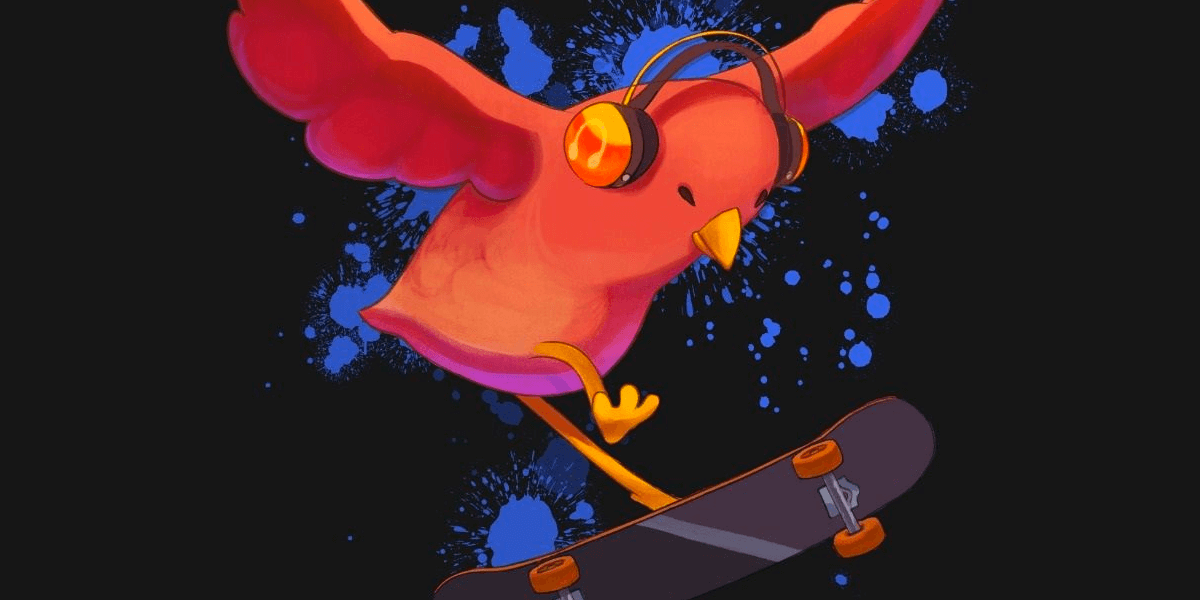 Speaking of brighter tones, the soundtrack is half decent.

Actually, this is easily the most complete part of the game. Where SkateBIRD stacks on the gameplay, it lands a solid 1080 with its sounds. Even the birds themselves enjoy the beats, bopping their heads along as they skate.

Maybe they know the game is utter garbage too?

Truthfully, it really hurts to grade this SkateBIRD review so poorly. What could have been a skateboard simulator that took flight will most likely turn out to be a meme.

The best description would be ‘enjoyable absurdity’.

However, it’s really hard to stay mad at this game for too long. Although, it ultimately does punish you at times with plenty of shortcomings. The graphics are about as good as the PS1, the commentary is whimsical and the mechanics are questionable. For any die-hard skateboarding simulator fans, you are going to be miserable very quickly with SkateBIRD.

Regardless of that, you have to take a step back sometimes and just enjoy something. When you put away your critics’ cap and stop hunting for flaws, you start to have some serious fun with SkateBIRD’s light-hearted and silly nature.

Thoughts on SkateBIRD? Join the comments below.

Skatebird Review
Grind on bendy straws, kick-flip over staplers and carve killer lines through cardboard. But don't be too critical about the production. Above all else, Skatebird really does its best at delivering upon a great idea. Unfortunately, the delivery is awful; albeit extremely entertaining for a moment.
FTW
Plenty Customisation
Simple & Adorable
Light Hearted Fun
Took The L
Half Baked Production
Inconsistent Scoring
Weak Trick Selection
Terrible Graphics
49
Editor's Rating
–

Content Disclaimer: This SkateBIRD Xbox Review is independently written. We have not been commissioned by Nintendo, nor have we received any royalties for this article. This includes financial reimbursement, free advertising or the SkateBIRD game.

Should you click on any link to Amazon and make a purchase, we may receive a small commission. But that’s just how we keep this website alive! Feel free to hit us up in the comments with any questions you have about our reviews or SkateBIRD. 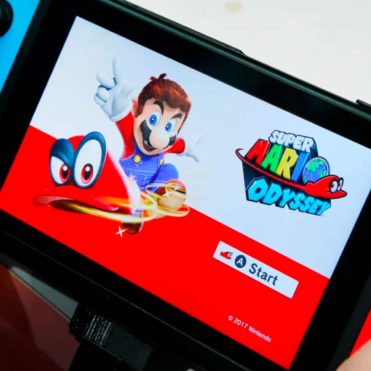