A glimpse of the next generation of Spider Man titles.

Allow us to preface this Spider-Man Miles Morales Review by stating that you do not need to play Insomniac’s 2018 hit Spiderman game to enjoy this title. You can definitely enjoy New York’s friendly neighbourhood superhero without playing the 2018 game first.

It is kind of like playing an amazing children’s Switch franchise game such as Sonic, Super Mario and Donkey Kong Country—in a sense that you can still pick up on the story without playing the previous titles. 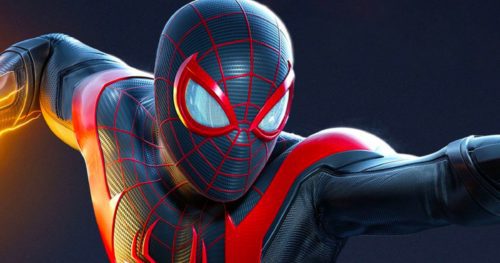 But don’t get us wrong. As you’ll soon find out with our Spider-Man Miles Morales review, this game is not like any of the classics we just mentioned. As a Playstation exclusive, Spiderman: Miles Morales is nothing short of fantastic. Especially with the enhanced next-gen console graphics and silky-smooth gameplay. Quite frankly, it’s an open-world web-slinging extravaganza!

Scroll through our Spider Man Miles Morales review below to unlock all there is to know about Insomniac Games latest addition to the Spiderman series before you buy! Get those spidey senses tingling as we go under the hood to explore the gameplay, the combat mechanics and even the soundtrack in this epic adventure.
– 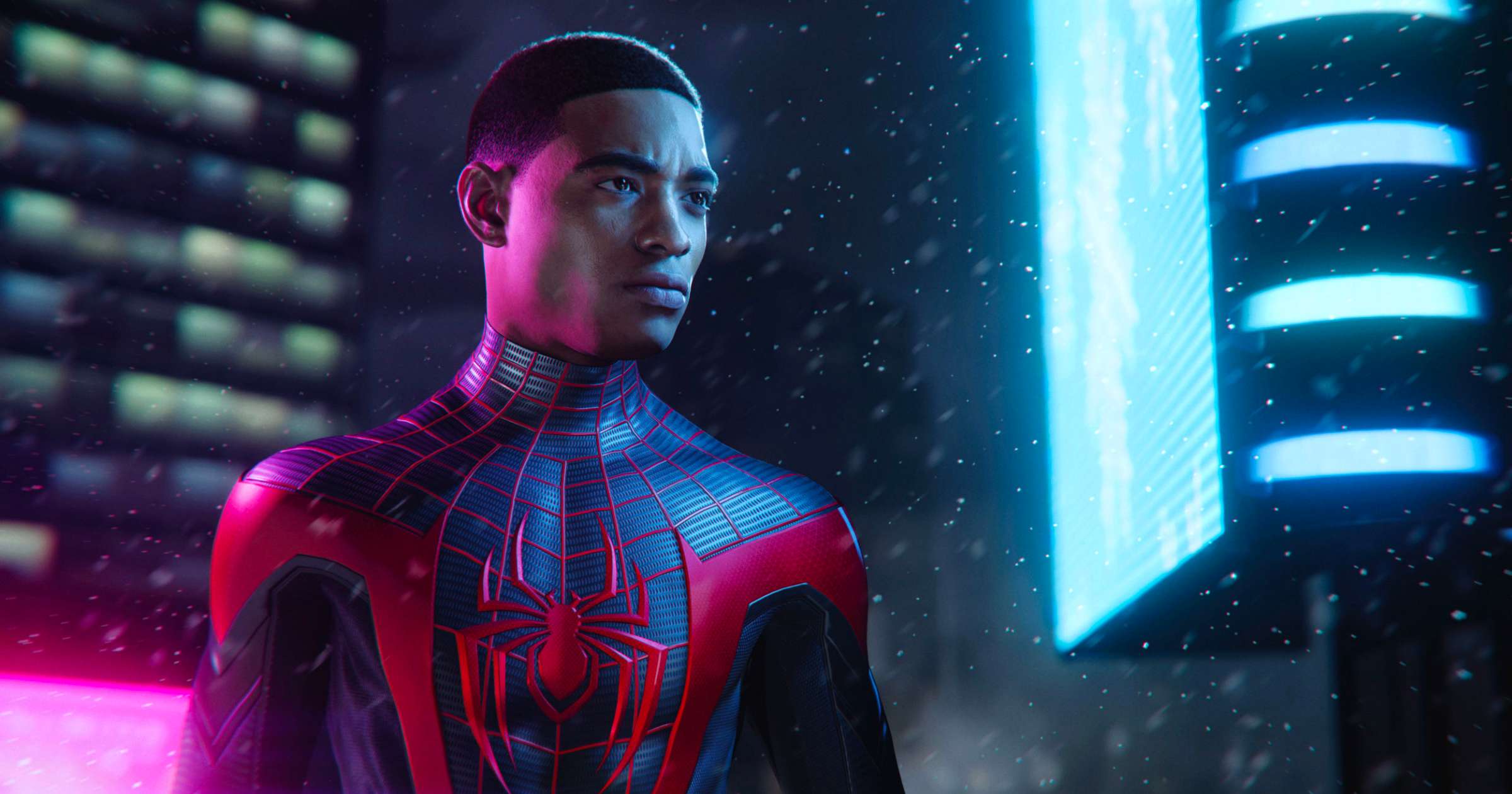 Spiderman: Miles Morales is essentially the same Spiderman game from 2018 with a bunch of cool additions to make it feel like a standalone entry. So, if you have already played the first Spiderman game, this somewhat ‘sequel’ isn’t going to knock your socks off. But, it will impress you nonetheless.

As a PS5 flagship game, the main focus has gone into blowing your mind and showing you what the next generation of Sony consoles are all about. In our opinion—it definitely did give us a glimpse of what to expect from a next-gen game. However, if you are still on a PS4 or PS4 pro, this game still pushes the limits of previous generation consoles with its heartwarming story and exciting gameplay.

With Miles’ new venom abilities, invisibility power, and slight hints that he is still mastering the art of web slinging, you will definitely feel that you are a new Spiderman trying to fill the shoes of the original Spidey that New York City knows and loves.
–

Spiderman: Miles Morales features a classic spiderman story with fun new side characters. Of course, Peter Parker is still a part of the game, but he doesn’t take too much of the spotlight from Miles.

The main story focuses on Miles Morales, who was introduced in the first Spiderman game as a playable side character. But the game was kind enough to give players a recap of the events in the last game to get them up to speed. After all, Morales is not exactly a centrepiece within the Spidey series.

When we say a classic Spiderman story, we mean having to deal with Miles’ inner conflict of stepping up to become “The Spiderman” while Peter Parker is on a well-deserved vacation. This is the main story behind Miles Morales and the game nails this perfectly.

In addition, we get to meet new characters like Miles’ mom, best friend Ganke, uncle Aaron, and Miles’ oldest friend Phin. And we will experience classic Spiderman conflicts like juggling with his personal life, experiencing betrayal, and hiding his secret identity. If you are a fan of Spiderman comic books, TV shows, and movies, this game definitely pays homage to the Spiderman storylines.

The pacing is also really well executed. The story exposition, missions, boss fights, and side missions are excellently placed, so there will never be a dull moment—except for a few repetitive side quests and open-world activities that were put there to expand gameplay time. To be completely brutal, the side guest is a huge afterthought and you can tell the producers were only looking to increase runtime. 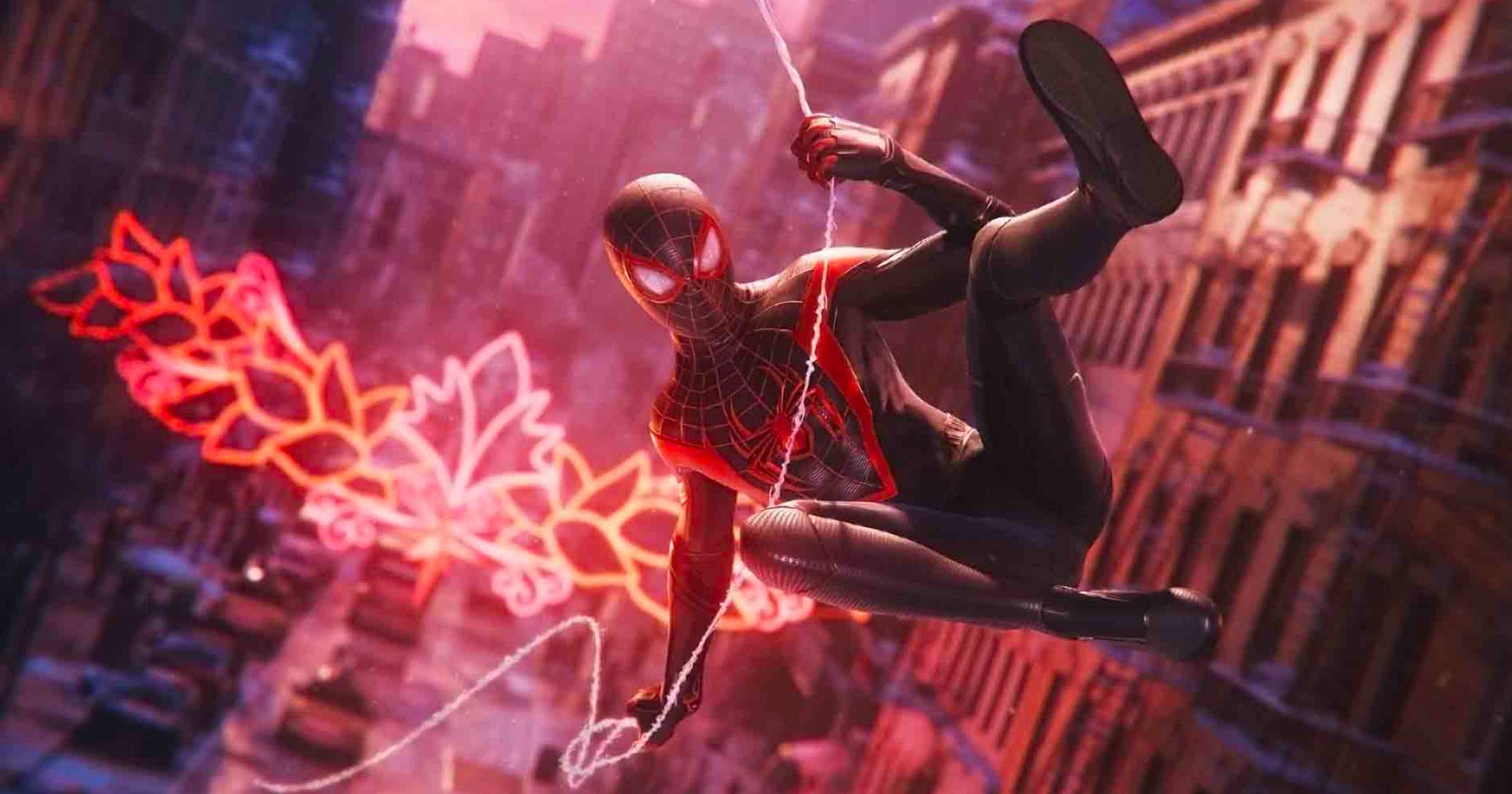 If you have already played the first 2018 Spiderman game, the gameplay will feel very familiar. In fact, when writing this Spider-Man Miles Morales review, we couldn’t help but feel a little cheated. The game was almost identical.

The combat system is the same, and in classic Spiderman style, it is all over the place—but we mean that as a compliment. As you swing, jump, launch enemies, use gadgets, suit powers, and use venom power—finding new ways to stun enemies during combat is still really fun.

The map is the same New York City map from the first game, but during the holiday season with snow and Christmas decorations. All the Marvel easter eggs are still there, such as the Avengers Tower, Jessica Jones’ PI firm in Hell’s Kitchen, and the Sanctum Santorum. However, there is a slight difference in the fact that the city is covered in snow, which honestly looks good.

As for the difficulty, if you are looking for a challenge, this may not be it.

Even in the hardest modes, you can still pretty much beat the game without having too many problems. Don’t go expecting that this game will be as tough as Dark Souls. It’s a DC game after all! However, what it lacks in terms of difficulty and challenging yourself, it makes up for with its compelling story arc.

A Much Faster Map

Exploring the map is one of the best improvements to the original 2018 version. As much as that sounds like the 2018 version was bad, that was really not the case. In fact, we did not think much could be improved, however, the fluidity of the map with Miles Morales makes for much smoother gameplay.

With added tricks, diving for speed, and the use of venom jumping, you can get to your destinations quicker and the holiday season vibes are just a joy to witness throughout. If you want to get to Chinatown from Harlem, the map also feels a lot quicker, especially if you can find a high skyscraper to launch from.

As always, exploring the map in Miles Morales will allow you to fight random crimes and do different activities. Unlike the first game—the crimes happen randomly, and they are unlimited. This will enable you to get more activity tokens for unlocking suits and other items which is really cool.

With character building, including completing your skill tree, this is pretty much the same as the original game and to be honest, that’s not such a problem.

Completing specific activities and levelling up allows you to build your skill tree and get new gadgets for newer ways to beat down enemies. However, you can finish the game without getting all the gadgets or filling up all the skills. It is just put there to make the game more exciting and interesting.

For us, this kind of sucks. The whole point of a skill tree is to help you traverse through the difficult levels later on throughout the game. But again, you need to remember that this game is built for family entertainment rather than nailbiting combat. 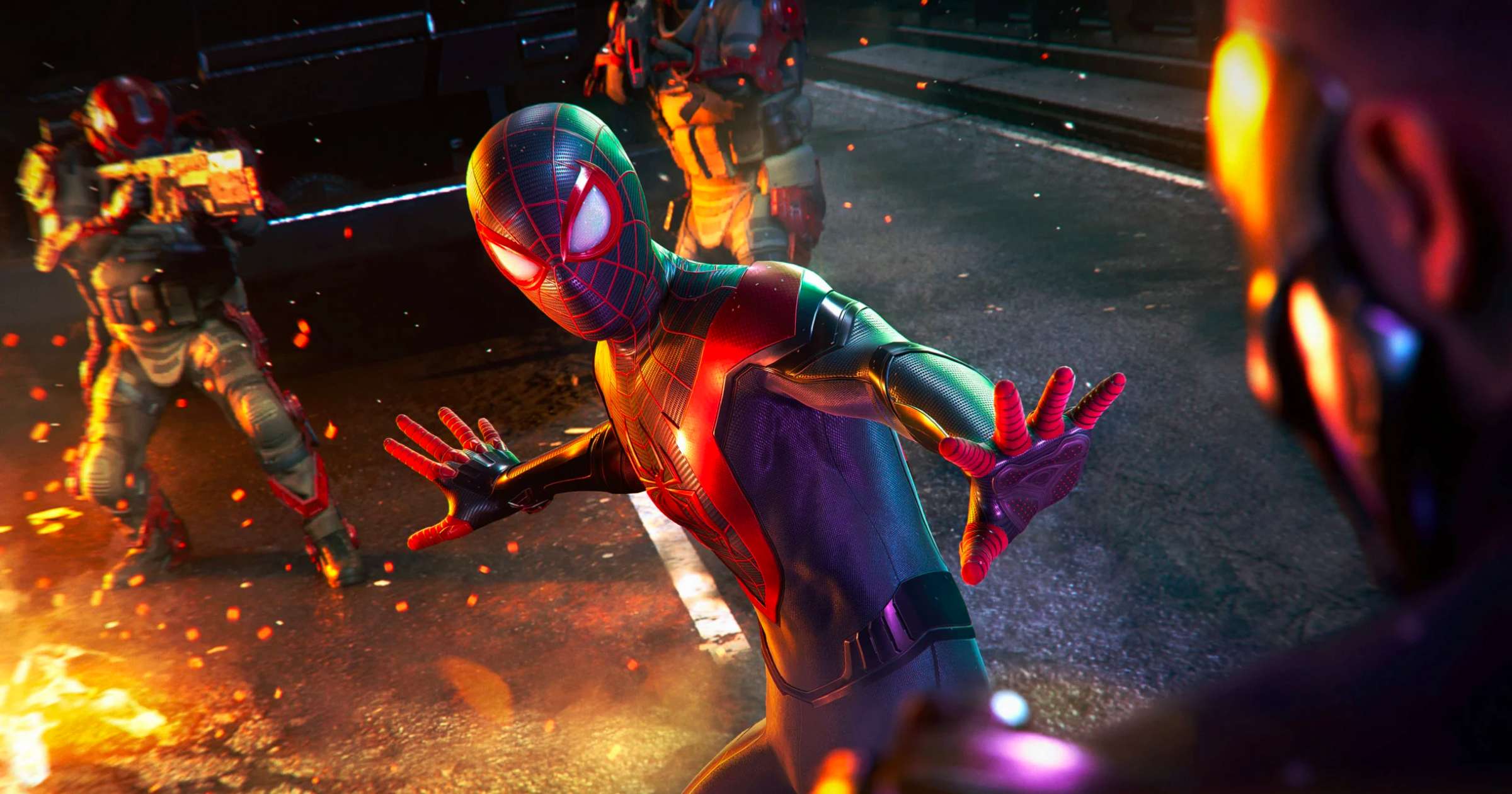 Similarly to the original 2018 Spiderman, the combat is a little repetitive. Of which, fighting groups of enemies can be a little meh; especially if you have already experienced playing the first game.

However, the addition of venom abilities adds a cool touch. We absolutely love Venom so this was a nice surprise to see that  The invisibility ability is also a mediocre addition to stealth stunning enemies, as we did not find a lot of use for it throughout the game.

If our Spider Man Miles Morales review had to pick one of the best new features of the game, it would definitely be the Spiderman App. Instead of getting side missions all over the place, the addition of the Spiderman App which allows citizens to ask for Spiderman’s is a good touch.

By adding this feature, you don’t actually need to explore the map too much to find your next philanthropy trophy. Which, for them moments that you just want a quick buzz of good vibes, this comes really handy.

A close second of the things we loved the most when writing our Spider-Man: Miles Morales review was the soundtrack. If you ever watched Spiderman: Into the Spiderverse, you probably already know that Miles loves hip-hop music, mainly because he is from Harlem, the birthplace of the genre. So, expect to get your Wutang on!

You still get the classical Spiderman soundtrack as you sling around the city, but it is now infused with hip-hop elements like 808s and synths. Plus, we really liked how the music gradually fades when you are done web-slinging. That’s a nice touch that not a lot of games think about.

When you consider that some of the game is a little repetitive, without a good soundtrack this game would be a real drag at times. So, huge props to the developers for nailing this component! 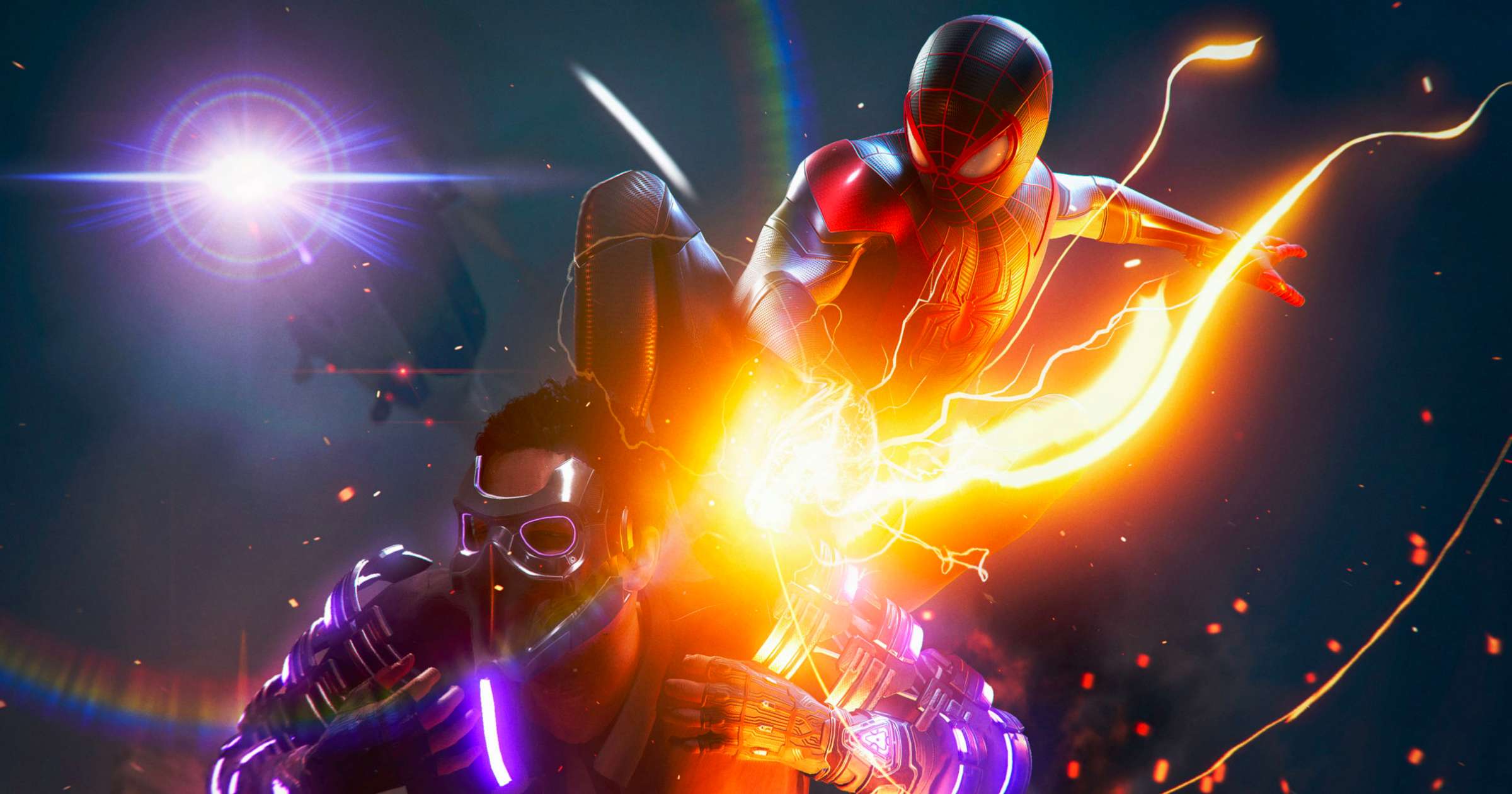 Despite the repetitive side missions and the fact that Spiderman: Miles Morales feels somewhat like a bolt on to the original 2018 game instead of a full game itself, we have given this Spider Man Miles Morales review a highly respectable 88%. Although this game is meant to be a standalone Spiderman game, the gameplay feels relatively short. But that doesn’t affect the fact that it is amusing to play.

It has a compelling storyline, well-executed pacing, interesting side characters, and decent villains. The soundtrack is dope, the ability to help citizens is always a good time and what’s not to love about web-slinging.

If you have not played the 2018 game, you are still in for an absolute treat and to be honest, we are being extra critical because we did play the original. Not to mention that Sony just launched a Spiderman Bundle. This bundle includes the first Spiderman game remastered for the PS5 and the next-gen launch Spiderman Miles Morales game. Now you get the save the city of New York twice over within a single purchase!

Overall, it’s must buy, only when you can grab a sweat deal!

Thoughts on Spiderman: Miles Morales Join the comments below.

Spider Man: Miles Morales Review
An Fun Web Slinger
Although relatively short and much the feeling of a DLC rather than a complete game, Spider Man Miles Morales is one heck of a web-slinger. There's an exciting storyline, good pacing and top notch graphics to enjoy throughout.
Graphics
94
Storyline
88
Soundtrack
90
Gameplay
81
FTW
Exciting Storyline
Good Pacing
Insane Graphics
Took The L
Feels Like DLC
Repetitive Missions
Not Challenging
88
Editor's Rating
–

Questions about Spider Man Miles Morales? Check out some of the most frequently asked questions our editors answer.

Content Disclaimer: This Spider Man Miles Morales Review has been independently written. We have not been commissioned by Insomniac Games, nor have we received any royalties for this article. This includes financial reimbursement, free advertising or the Spider Man: Miles Morales game.

Should you click on any link to Amazon and make a purchase, we may receive a small commission. But that’s just how we keep this website alive! Feel free to hit us up in the comments with any questions you have about our reviews or Spiderman and don’t forget to let us know your thoughts on our Spider Man Miles Morales review. 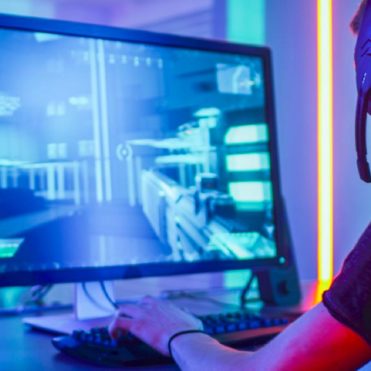