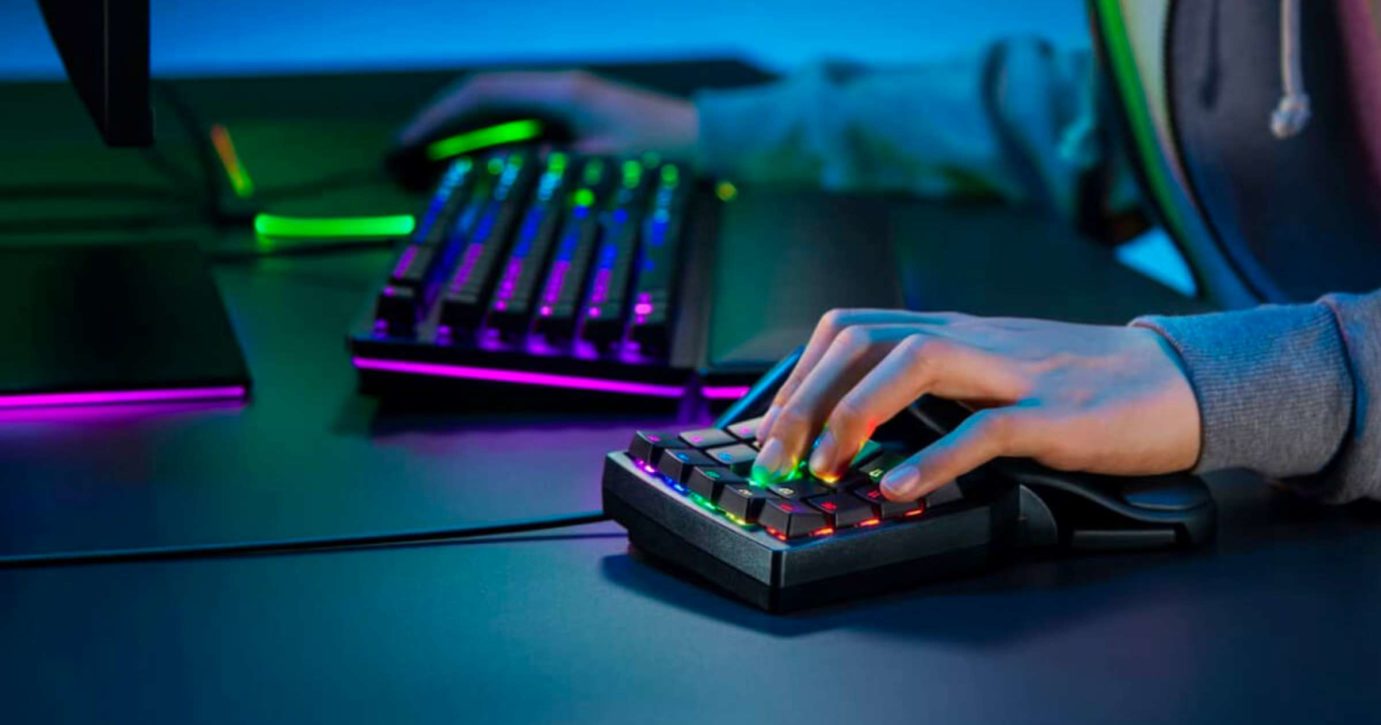 Everything you need for most of your favourite games within one small package.

While some people are hobbyist gamers, others are far more interested in the competitive scene with aspirations of becoming a professional in the future. If you’re the latter, one thing is for sure, you’re going to need the best equipment around.

Regardless of where you stand, there is no denying that gaming is on the rise. And, it is precisely why we are witness to increased innovation with computers and accessories. Although there is huge focus on sharpening up your reactions, increasing your FPS and mitigating your lag, it also helps when computer manufacturers put effort into making sure all aspects of our gaming rig are at peak performance.

For instance, to avoid potential data corruption to your once in a lifetime clutch moment videos, you can use Mac OS Time Machine or cloud storage as a means to have a safety net for important files. Or, if you want to avoid potential malware attacks, there are antivirus tools that detect and eliminate the problem before it manifests.

Of course, innovations in computer development are only one part of the gaming industry. Accessories and gaming peripherals play a prominent role too. Of which, today, we’re exploring gaming’s latest trend with one handed gaming keyboards and whether they are worth purchasing for your gaming setup.

Are one handed keyboards worth the hype? Scroll down to find out! 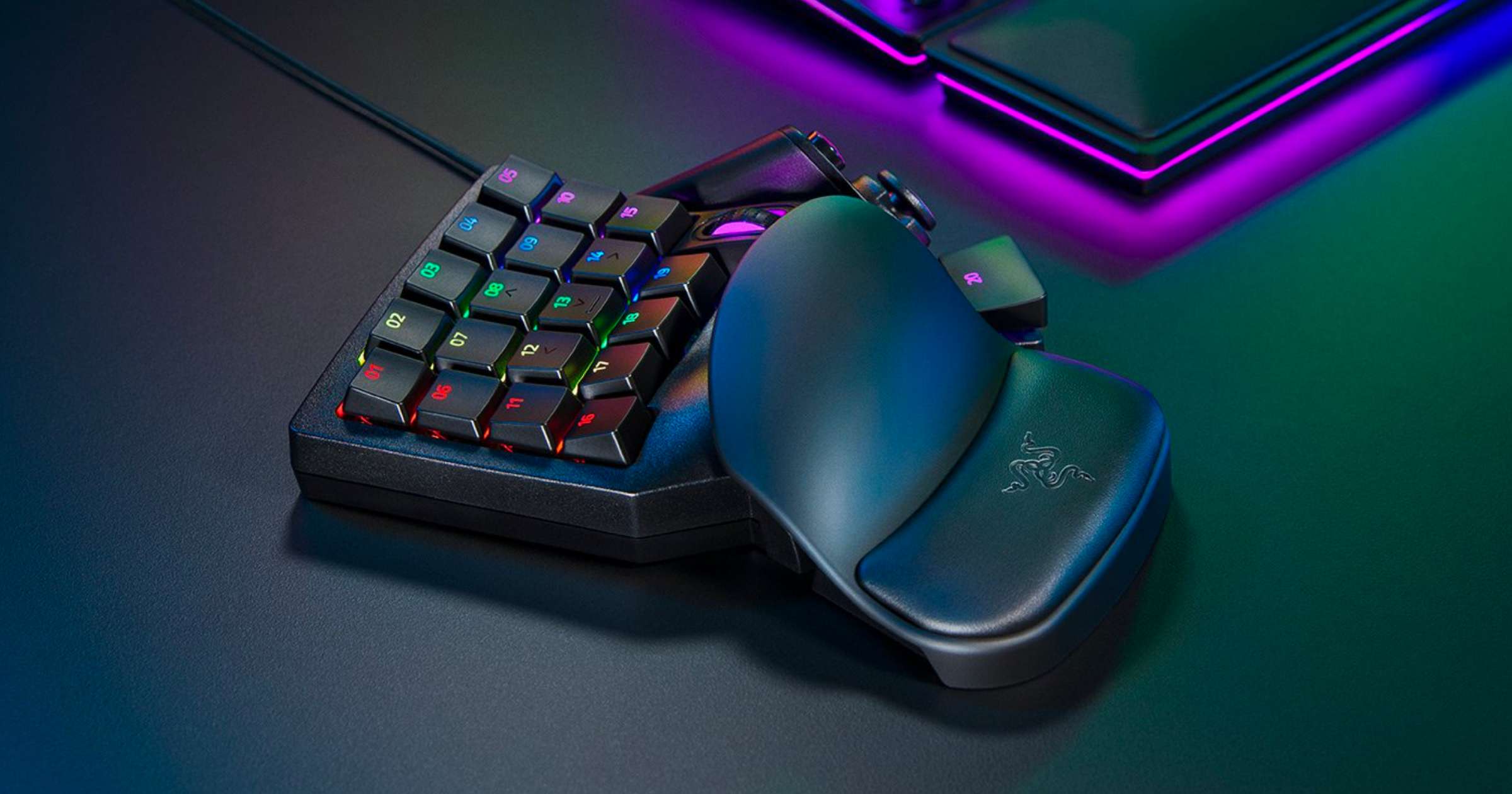 What Are One Handed Gaming Keyboards?

Sure, they are completely unusable for anything else but gaming but who’s bothered about doing work anyways? With one-handed gaming keyboards, you have to say goodbye to absolutely everything (including typing) and focus purely on gaming. Unless you’re familiar with macros. But, even then, your options are still mostly limited to gaming.

Let’s say that you are playing FPS games on your Xbox. On a gaming computer, a mouse and the WASD keys, as well as some other keys, are usually enough for optimal gameplay. It’s very rare that you will use other keys to play through each game. And, even when you are using products such as the Razer Turret to get the full PC experience on your console, again, you’ll only really need the WSAD and C keys for complete performance.

If all the necessary keys fit on a one handed keyboard, then it does not sound too bad, right?
–

Different Types of One Handed Keyboards

Similar to choosing between wireless and wired mice, there are so many options available when it comes to one handed keyboards.

If you were to look up one handed gaming keyboards, you would find it hard to distinguish how exactly each model is different from the rest (barring certain shape choices). There is no need to focus on that. What you want to pay attention to is the key setup and what individual keys such a keyboard has.

A common approach to modern one handed keyboards is to take the left side of a regular keyboard and just use the keys most users are already familiar with. The method is understandable given how easy it is for someone to transition from a usual keyboard to a one handed keyboard that comes with a familiar key layout.

Besides the layout, you should also consider what type of keys you prefer. As always, even with cheap regular keyboards, there are a couple of switch options. Those who are on a tight budget will usually go for keyboards with membrane keys, as the cheapest products come with this style by default.

However, your choice will ultimately boil down to your preference when touching the keys. But what about one-handed keyboards? What are the pros and cons of one handed keyboard devices and are they worth buying?
– 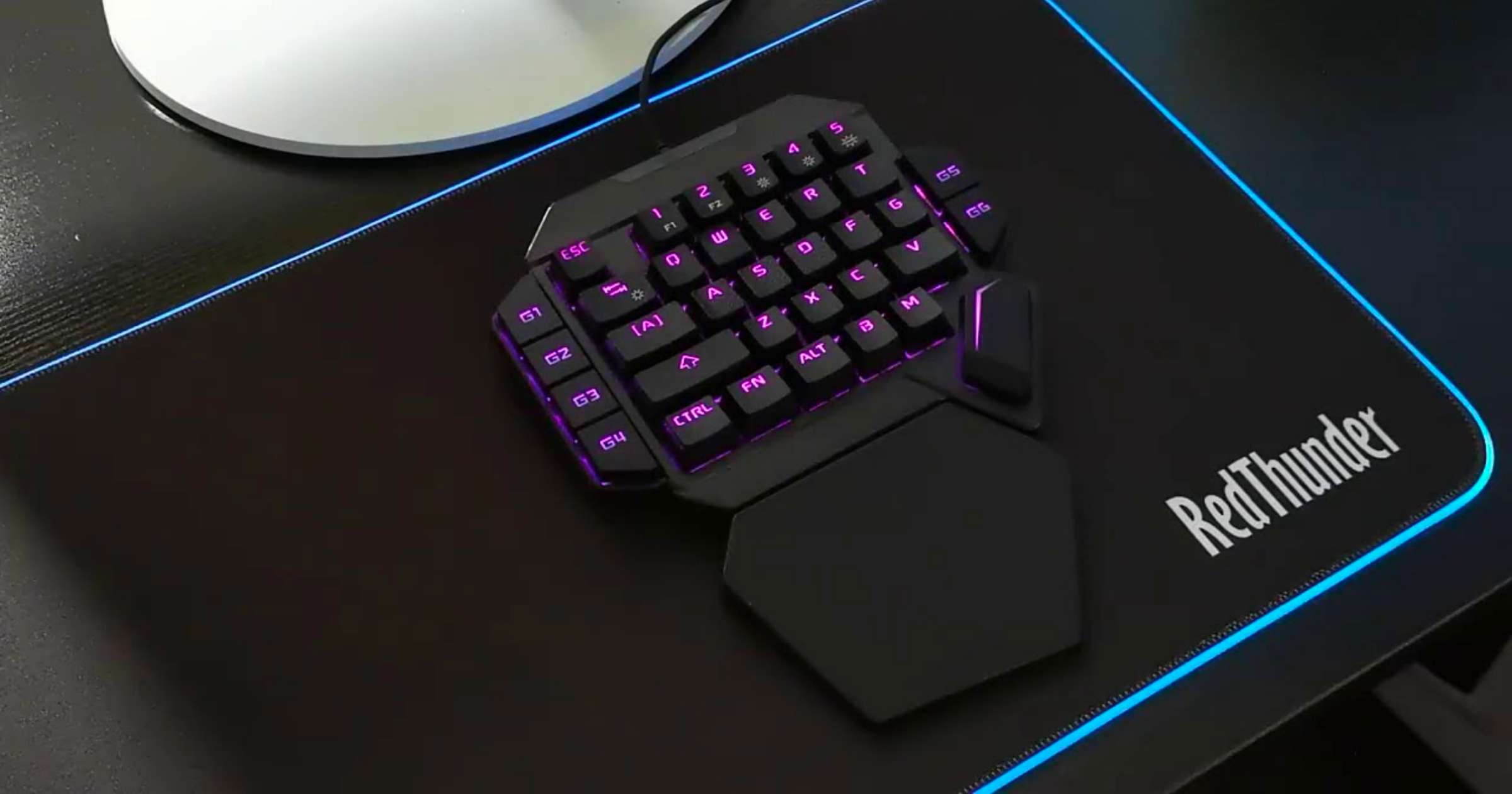 Benefits Of One Handed Gaming Keyboards

The first advantage of having a one handed keyboard is the price. Compared to a full-sized gaming keyboard, you will have to spend less money. Why? Well there’s far less materials for manufacturers to produce of course! While still slightly more expensive than some of the cheapest gaming keyboards around, if you use your computer for nothing but gaming, you’ll save right here alone.

Gaming performance is another example of an advantage. While the keys themselves are identical to that of a traditional keyboard, your muscle memory will gradually improve. By not using any other keys at all, your muscle memory will purely focus on the few keys that are left. As a result, your reaction times will be faster and you’ll seldom press the wrong keys.

Surprisingly, one handed gaming keyboards are actually extremely ergonomic. Often supported by a wrist-rest, the ergonomics of one-handed keyboards are no different to that of a well supported mechanical keyboard. With keys perfect distance apart, you’ll feel no difference to your wrists during long gaming sessions.

The size is arguably one of the biggest advantages of one handed keyboards. If you do not have that much space to work with, then you can circumvent the problem by getting a much more compact keyboard (at least as far as your gaming goes). Of course, the size comes with compromise as the keyboard will be useless for anything but gaming, but again, who needs anything functional anyways!
–

Besides the lack of other letters rendering one handed gaming keyboards totally useless for anything but gaming (and certain types of genres at that) there are really not many other negatives.

For driving games and FPS games, the keys that are available will quite literally be all that you need. That is, of course, unless you love to flame your opponents via text chat! However, for strategy games and MMORPGs, these types of games require multiple keys. Of which, one handed gaming keyboards might come up short. That said, setting up macros on a one handed keyboard is something to consider. You can also take advantage of extra keys on your gaming mouse if you have one.

However, overall, it is difficult to imagine playing certain games without the full 104-key keyboard which kind of clips your wings quite a lot.

As for the price, while actually a huge victory for single handed keyboards, some leading manufacturers such as Razer’s Tartarus V2 are still expecting gamers to pay a whopping $129.00 for a single use keyboard. For us, this is quite substantial given it’s limited use and while the Chroma is obviously lovely, we would much rather purchase a standard mechanical keyboard.
– 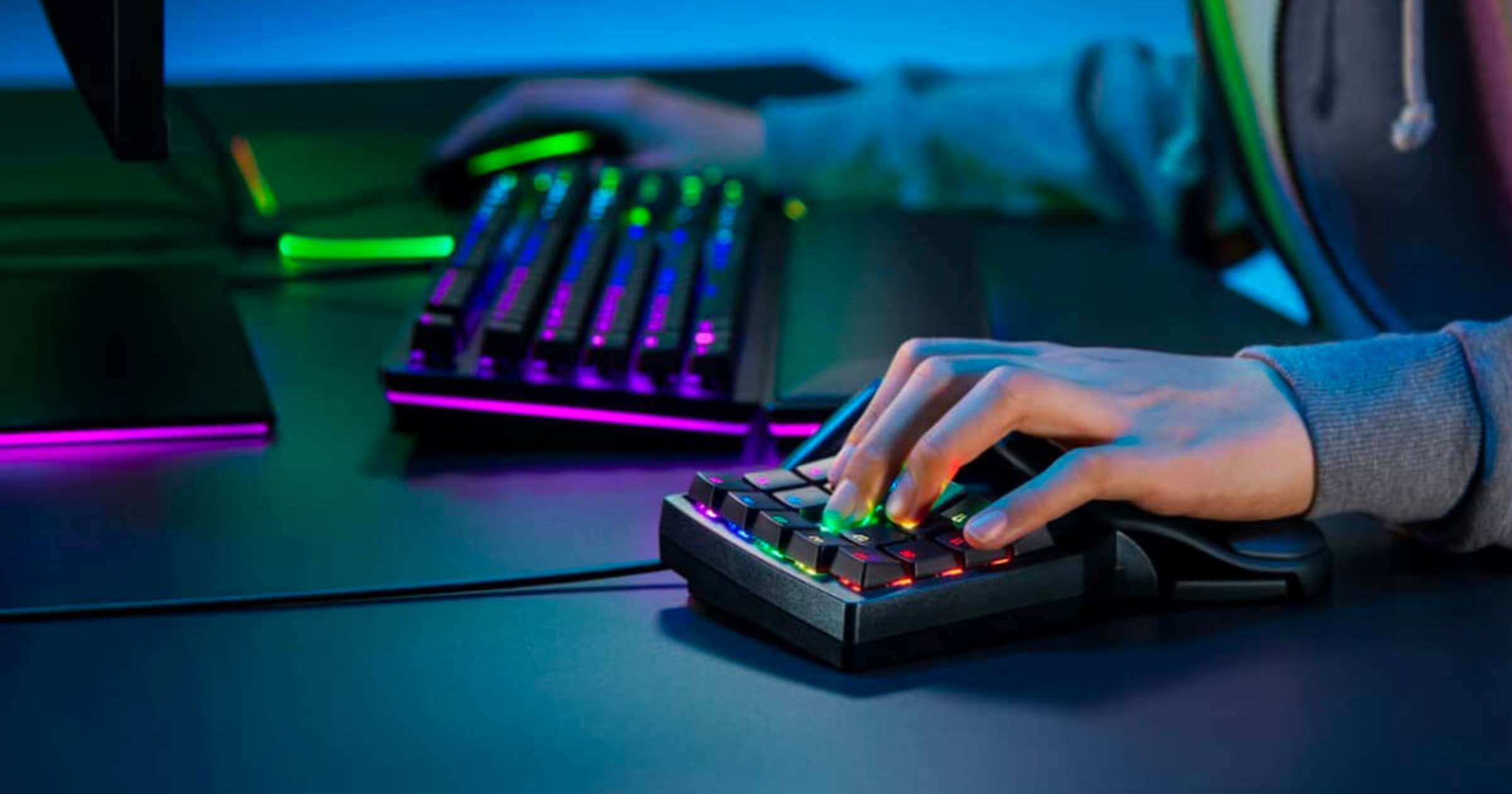 Are One Handed Gaming Keyboards Worth Buying?

If you have surplus cash or are a complete technophile, one handed gaming keyboards are definitely worth buying. However, that is only when you play games that make use of the traditional WSAD setup and perhaps a few others. Else, you’re going to be bitterly disappointed that your compact keyboard won’t work properly.

In addition, for anybody who is looking for a hybrid keyboard for both gaming and professional work, there’s absolute no chance that one handed gaming keyboards will be suitable for you. So, we would recommend opting for something a little more traditional. If the hybrid nature of your keyboard is the priority, you don’t need to spend hundreds on the full keyboard. A mid-range keyboard will do just fine for most gamers.

Overall, we would grade one handed keyboards as a ”buy with caution”. Do your research and make sure that you ultimately need this accessory before taking the plunge and investing a further $50-70 on your gaming setup.

What are your thoughts on one-handed keyboards for gaming? Hit us up in the comments below with whether you think one handed keyboards are worth the hype. When you’re done, don’t forget to check out our editors other incredible technology and game reviews below! 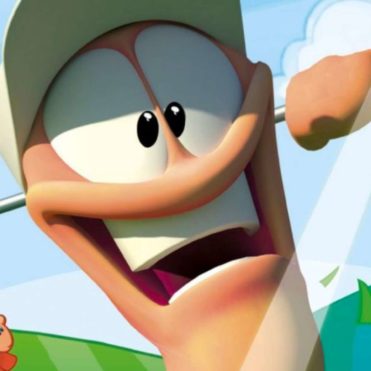