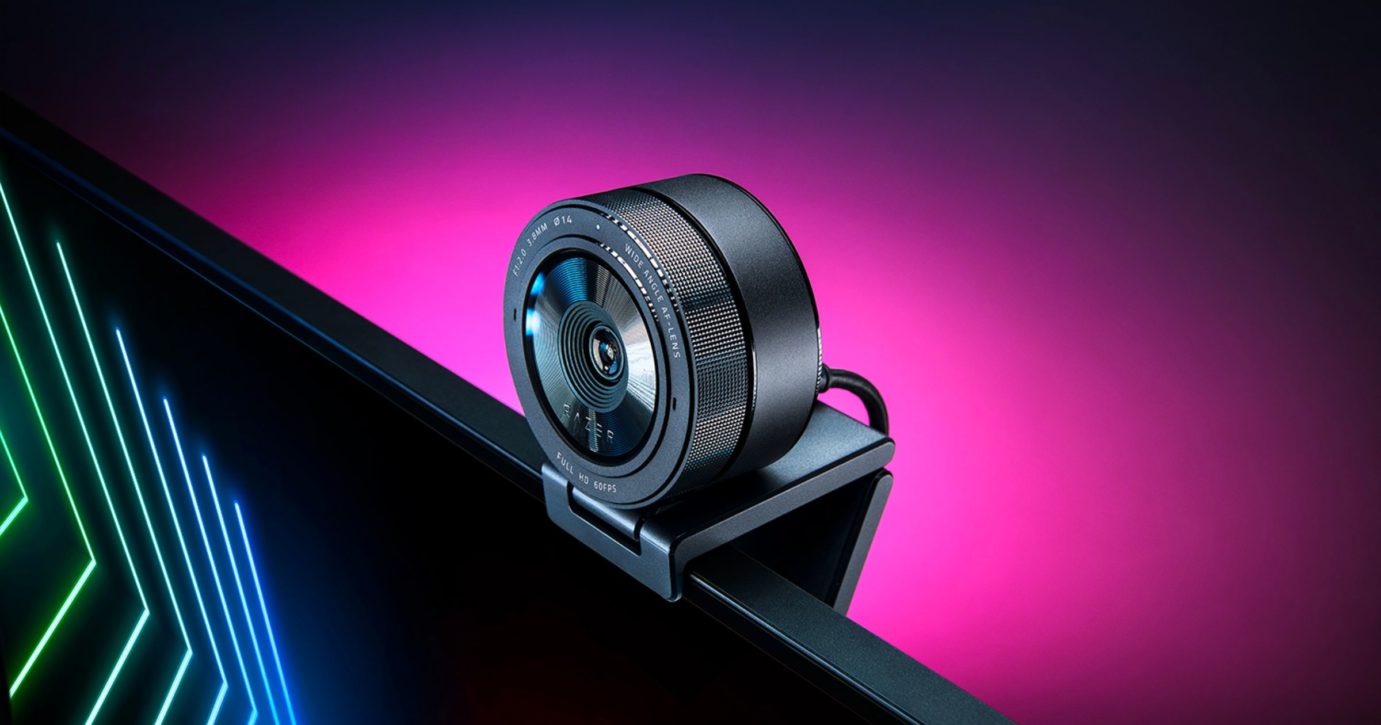 Can the Razer Kiyo Pro webcam live up to its older brothers hype?

Releasing the Kiyo Pro at a fortuitous time when the world went bananas for remote working gadgets, this high-quality external web camera is already much adored by gamers and business professionals across Australia. In common, they share one thing which is the understanding that you don’t necessarily need bright lights, professional cameras and high-quality microphones to get the job done. Not when you have high-grade supportive technology behind you like the Razer Kiyo Pro. 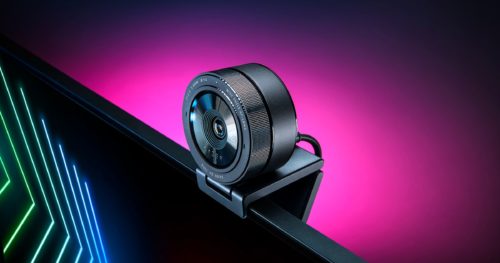 Made for gamers, by gamers, the Razer Kiyo Pro is the premium option to Razer’s signature and original Razer Kiyo. Which, by the way, is possibly one the best value web cameras you could have purchased in the past 4 years. So, it goes without saying that we were pretty hyped when Razer revealed they were releasing a premium version back in early 2021.

However, is there enough of an upgrade to warrant the huge price tag of the Kiyo Pro? Especially when the Kiyo Pro is missing 4K support? Read on to find out as we go under the hood of Razer’s most recent addition in this Razer Kiyo Pro webcam review.

Don’t forget to hit the comments below with any questions once you are done!

Razer Kiyo Pro Review Verdict
If you thought the original Kiyo was good, by golly are you going to love the Razer Kiyo Pro. There really is just not much to dislike about this genius streaming web camera. Unless you are on Mac, of course. It's an absolute must buy.
Design
95
Video Quality
95
Microphone
94
Features
97
FTW
Enjoy 1080p frame rates.
Powerful HDR.
Durable framework.
Super easy to use.
Took The L
A little costly
Reliant on Razer Synapse.
95
Editors Rating

The first thing you will notice when unboxing the Kiyo Pro is that Razer has adopted a near identical form factor to the original Razer Kiyo. Yet, there’s no ring light! 😲

In addition, the second revelation when had was that the Razer Kiyo Pro is one super thick unit. Not thick from an intelligence perspective but boy, oh boy, does the Kiyo Pro weigh some. It’s like having an actual camera lens mounted to your monitor!

Significantly larger than the Logitech C920, the Razer Kiyo Pro measures 8.5 x 8 x 4.5 inches. With a circular frame, this extends to the back when you will find the USB Type-C port for power. Then, on the underside of the Kiyo Pro, you will also find the connector for the mount. This can be detached or reattached to a tripod should you not be attaching this camera to your monitor.

As durable as web cameras come, the Razer Kiyo Pro also adopts Gorilla Glass 3 which makes its lens both damage and scratch resistant which is extremely comforting for anybody on the move. That said, we wouldn’t really put this to the test too much! On the downside, the included detachable 4.9-foot USB Type-C cable is too short for our setup. But we’ll get to that in a moment.
–

Specification wise, the Razer Kiyo Pro has everything that your everyday streamer, podcaster or business professional will need. Okay, so there is no 4K support but rendering 1080p and 60 FPS is ample enough for most people. Here are the key specifications of the Razer Kiyo Pro.
– 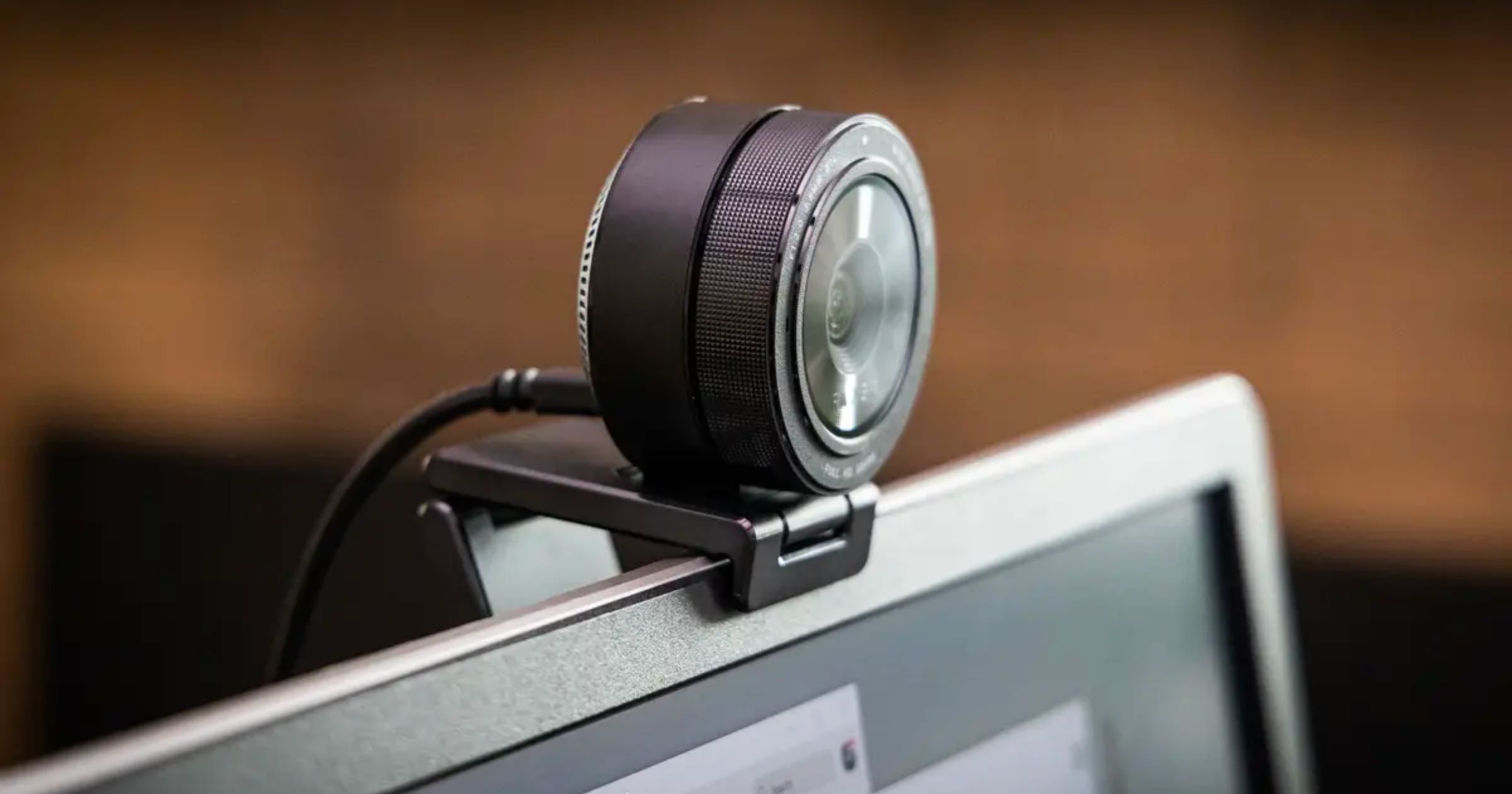 At first, we had slightly mixed feelings about what the missing ring light would do for the Razer Kiyo Pro. However, once using the webcam, we were totally blown away. Despite lacking 4K streaming (which Razer really should have added to compete with the Logitech Brio), the Razer Kiyo Pro’s performance under low-lighting is incredible.

Top of the list is the 1080p resolution and 60fps framerate which is unmatched by many other competitive and high quality webcams. Remember, the Brio does render 4K but is limited to 30fps. Then, the Kiyo delivers a wide-angle lens with an adjustable field of view (FOV) which is super handy for streamers. From 103 degrees at its widest, the Kiyo Pro will enable you to get multiple people within a single frame easily. No more cramming onto the chair!

Another key reason why the image quality is so good is that the Razer Kiyo Pro comes with HDR at 30fps. For most of you, 30fps will be ample and the image quality really does improve from SDR. As for sharpness, if the original Razer Kiyo was anything to go by, you can expect nothing less with the Kiyo Pro. Throughout testing, the image was sharp, clear and could easily focus on objects from 2 inches away from the lens which will be handy to show products on screen.

Using its adaptive light sensor which helps determine how bright or dark an image should be combined with the wide, medium and narrow field of view options, the Kiyo Pro delivers some of the best quality images you will get for this price range without 4K support.
– 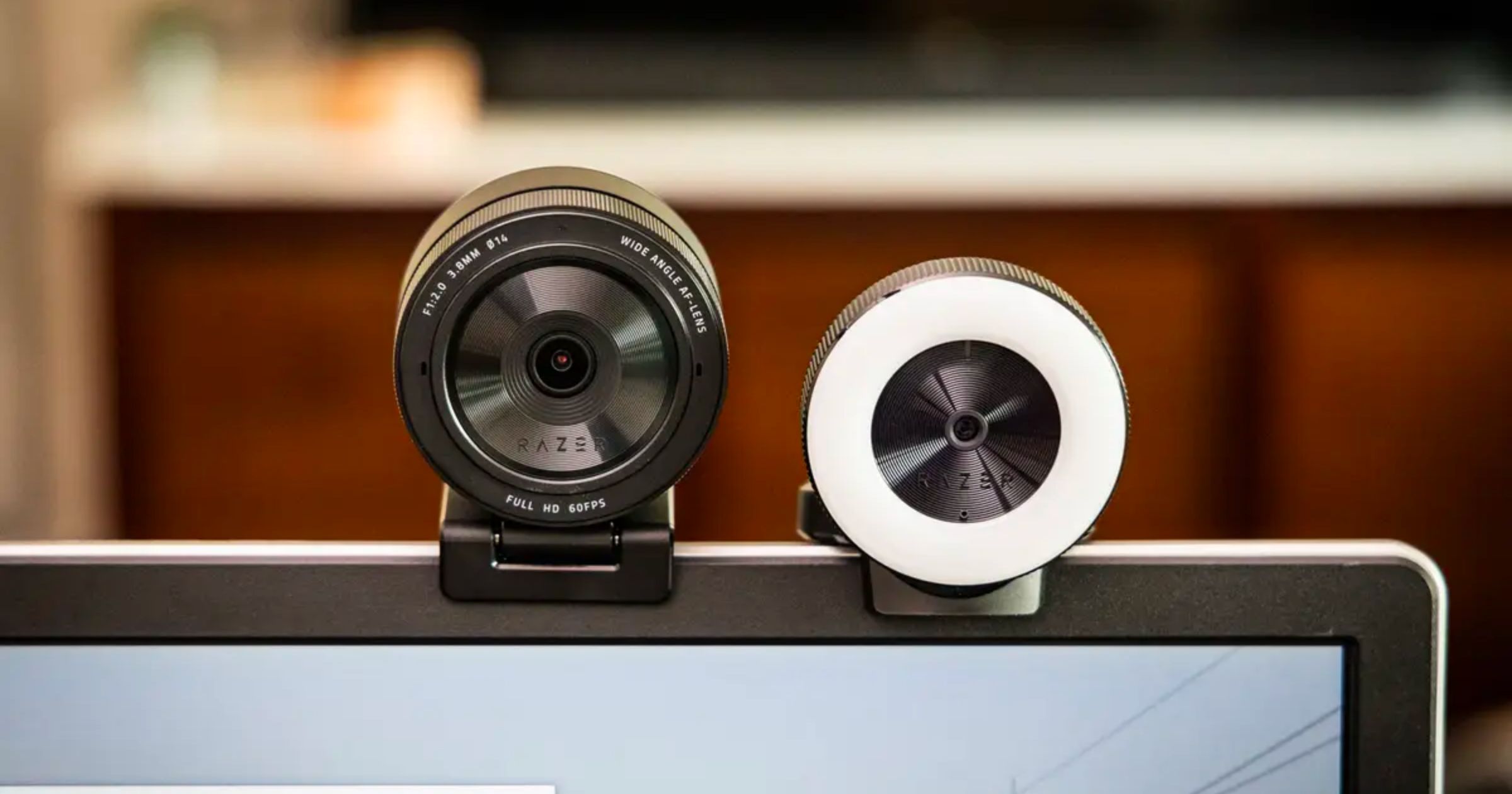 Webcam microphones are typically a bit of an afterthought. After all the device is just simply not big enough to pack quality microphone components. That’s why many people buy separate external microphones that generate professional sound.

That said, we are pleased that the Razer Kiyo Pro does come with a microphone as a backup solution and to be honest, it’s not that bad! As we belted out Wonderwall by Oasis, our voices sounded crisp and there was some depth to the recording. However, we really had to turn our speakers up during playback as our voices were quite low.

It’s quite clear that Razer has prioritised noise-cancelling here with the microphone which makes sense given that’s the biggest flaw with web camera mics. However, they may have gone a little too far which then requires you to tinker with the settings.

The true power of the Razer Kiyo Pro lies within the Razer Synapse App which you can use to control the settings and recordings. From previewing yourself to messing with the HDR, FOV and AF settings, Synapse is where the magic happens. This also includes basic options for brightness, contrast, saturation and white balance for anybody who is not down for crazy amounts of editing. Further to this, if you are totally against playing with settings, you can choose from 4 decent prests with ”Default”, ”Cool”, ”Vibrant” or ”Warm”.

All the Razer Synapse app provides you with enough to get you what you need out of this webcam, we did stumble across 2 primary issues. Firstly, the saved settings sometimes do not apply. We thought we were doing something wrong at first but nope, they just needed a few more attempts at saving before being carried across. Secondly, and most frustratingly, you cannot change the camera settings while using other software. You have to use Razer’s preview software to actually adjust the settings, which is annoying coming from the Logitech Brio, which let us change settings on the fly.

Despite that, the software is really incredible for anybody who enjoys tinkering and of course, you connect your Razer Kiyo via a USB 3.0 cable just like the predecessor.
– 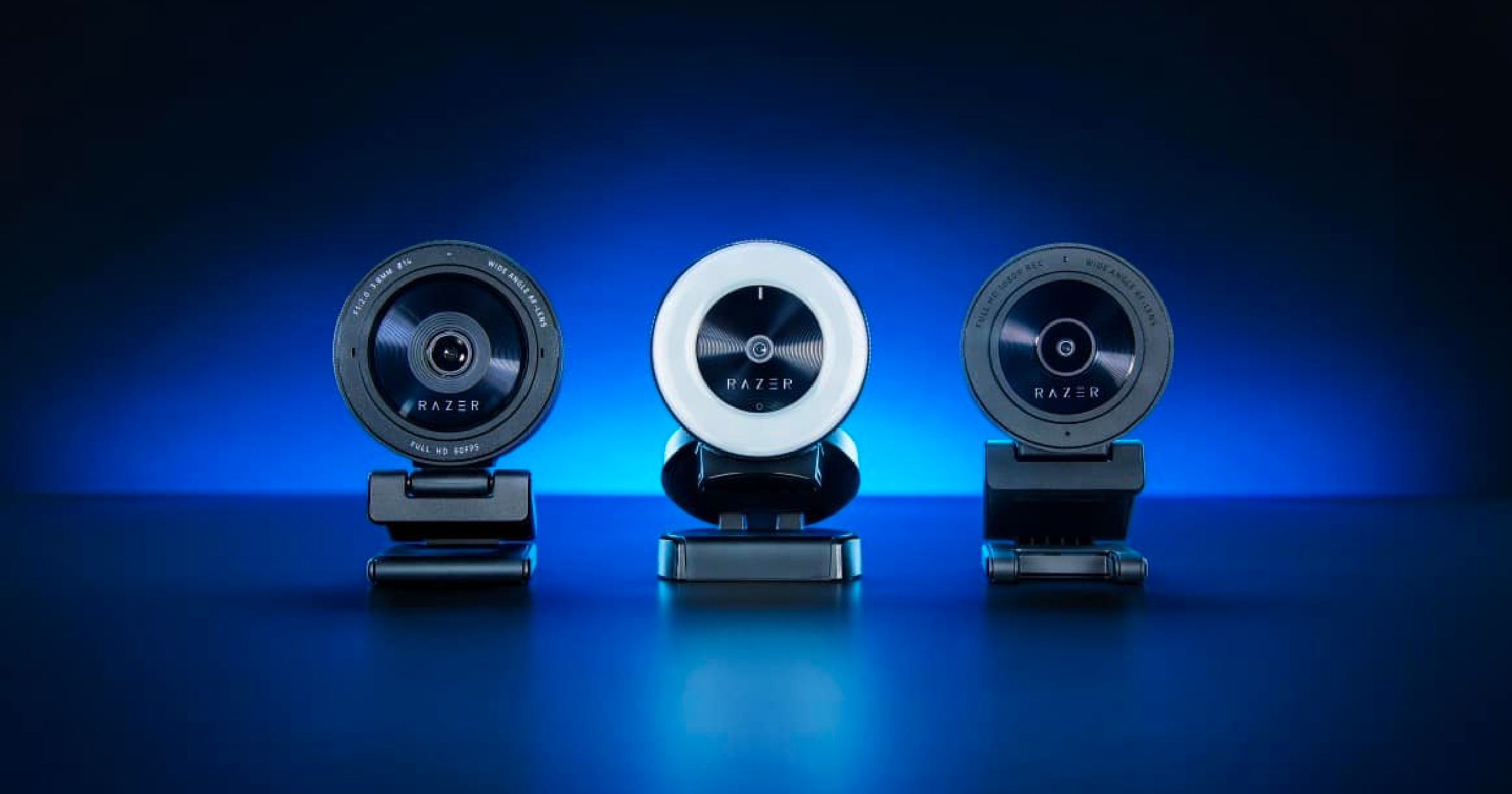 Available for just north of $200 the Razer Kiyo Pro is a little pricey compared to its older brother. However, the spec differences make the jump up a little less scary. As one of the best streaming web cameras available, there is huge value for money here with the Pro.

If you can swallow the $200+ price tag, you’re about to receive absolutely everything you could ever want out of an external webcam. Sure, there’s no 4K streaming and you might have to play around with the settings but the Razer Kiyo Pro is a beautifully engineered unit. Else, the original Razer Kiyo Webcam is also extremely well designed for a cheaper price. This makes it better suited to casual users.

When you consider that the Razer Kiyo Pro is $60 more expensive than one of the most popular streaming cameras (Logitech C922) and yet records with 60 FPS, it’s worth the step up. Not to mention the extra sharpness that users often cite when comparing the two products. We say this because $60 over the course of your streaming or recording lifetime is really negligible when striving to be the best.
–

This may not be a big one for some people who would prefer the low-light footage capabilities, however, unfortunately for us, it would have been great to see the Razer Kiyo Pro introduce 4K streaming. With major rivals Logitech already sporting a decent 4K external web camera in the Logitech Brio, it came as a surprise that Razer did not see this as an opportunity to seriously step up the original Kiyo.

In addition, the included cable with the Razer Kiyo Pro was actually too short for our setup. As much as this will differ from workstation to workstation, we much prefer longer cables that we can hide instead of shorter cables that won’t reach.

As trivial as that sounds, it was annoying! 🤦

Finally, the Razer Kiyo Pro is not made for the newest PC users or podcasters. With heavy reliance upon Razer Synapse to get the best picture quality, be sure to understand a little bit about editing before you go diving into the Kiyo thinking you will get absolutely perfect pictures straight away.
– 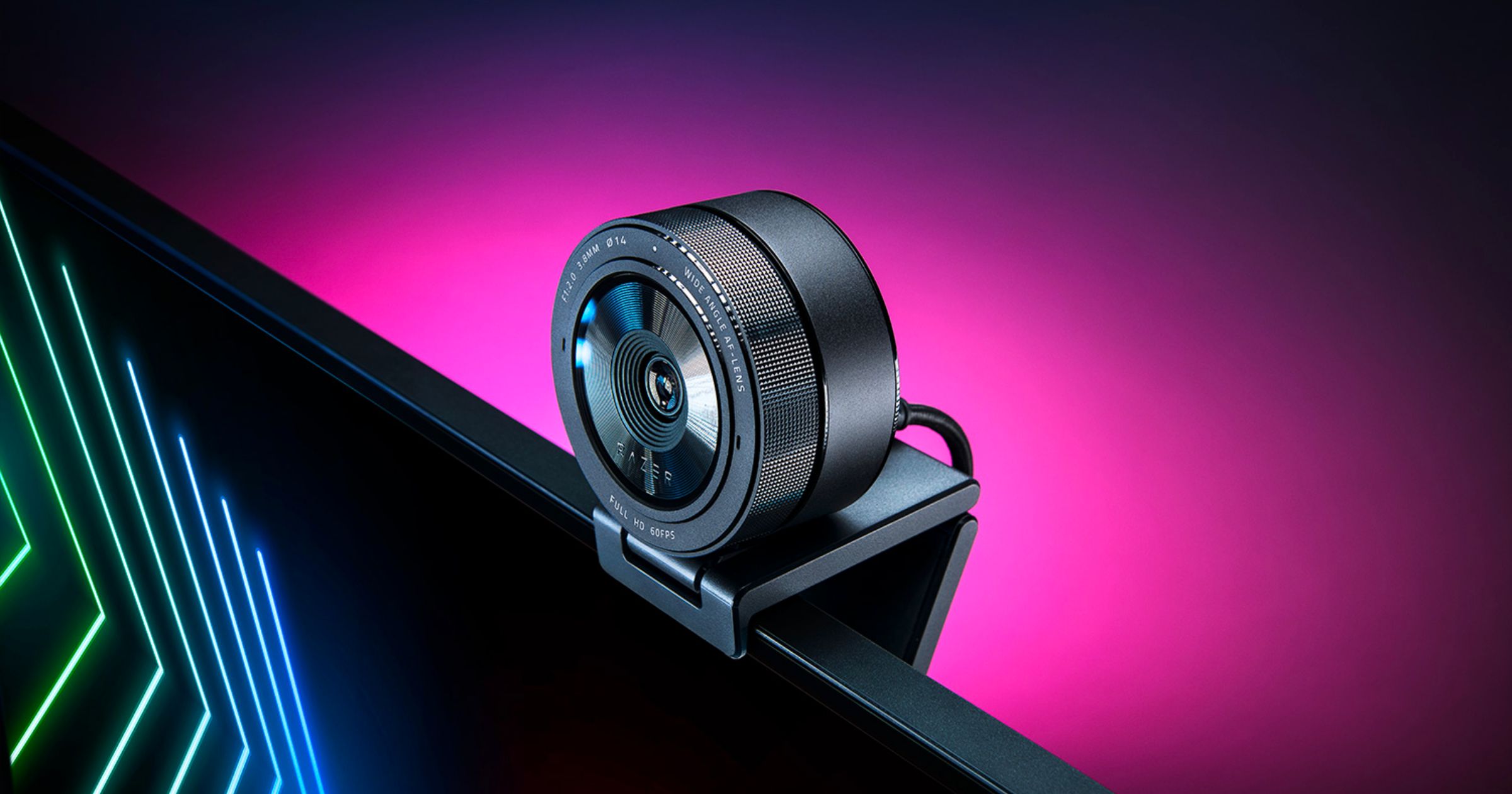 If you haven’t discovered already reading through our Razer Kiyo Pro review, we absolutely love this new addition to the Razer family. Truthfully, we were very sceptical as the original Razer Kiyo was just so damn good. However, despite losing the ring light, Razer has once again smashed it out of the park. It’s one of the best webcams we have ever used.

As a highly capable ”do it all” webcam with Razer Synapse to optimise your recordings, the Kiyo Pro provides a wide aperture and super sharp lens that actually makes the ring light redundant. For low light footage and people who do not want to invest in professional lighting setups, this is some of the best you can expect from an external web camera.

Again, should your budget be tight, the original Razer Kiyo or Logitech C920 will do the trick for startup streaming or recording. However, you’ll be missing out on what is almost guaranteed to win a multitude of ”web camera of the year” awards.

Razer Kiyo Pro Review Verdict
If you thought the original Kiyo was good, by golly are you going to love the Razer Kiyo Pro. There really is just not much to dislike about this genius streaming web camera. Unless you are on Mac, of course. It's an absolute must buy.
Design
95
Video Quality
95
Microphone
94
Features
97
FTW
Enjoy 1080p frame rates.
Powerful HDR.
Durable framework.
Super easy to use.
Took The L
A little costly
Reliant on Razer Synapse.
95
Editors Rating

Content Disclaimer: This Razer Kiyo Webcam Review is independently written. We have not been commissioned by Razer, nor have we received any royalties for this article. This includes financial reimbursement, free advertising or the Razer Kiyo Webcam by gift.

Should you click on any link to Amazon and make a purchase, we may receive a small commission. But that’s just how we keep this website alive! Feel free to hit us up in the comments. We would be happy to answer any questions you have about our Razer Kiyo Review. We hope you enjoyed reading this article! 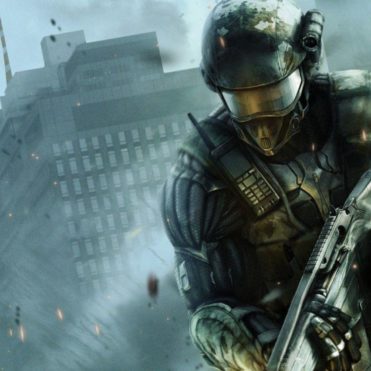